The EU on June 9 threatened the UK with retaliatory action if it refuses to implement post-Brexit trading arrangements in Northern Ireland. 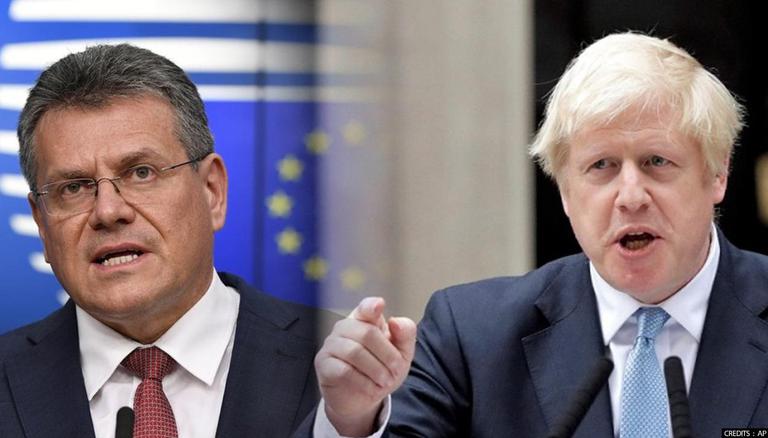 
The European Union on June 9 threatened the UK with retaliatory action if it refuses to implement post-Brexit trading arrangements in Northern Ireland. The talks between the EU and UK over Northern Ireland appear on the brink of collapse as London indicated that it was still considering action to keep unhindered supplies flowing from Great Britain into the region. However, according to The Guardian, visiting European Commission vice president Maros Sefcovic said that patience was “wearing very very thin” and further described the relationship with the UK as “at a crossroads”.

While speaking at a news conference, Sefcovic said, “Today I can say we are at a crossroads in our relationship with the UK. Trust, which should be at the heart of all relationships, needs to be restored”.

He said that there were “numerous and fundamental gaps” in Britain’s compliance with the agreement and added, “if the UK were to take further unilateral action in the coming weeks, we will not be shy in reacting swiftly, firmly and resolutely”.

Further, Sefcovic said that the actions could include legal action, arbitration or other retaliatory measures, including targeted tariffs, which has prompted talk of a UK-EU “sausage war” on the UK side of the channel. But the EU official also insisted, “We don't want this to happen... It's not too late. Let's correct the path”.

UK’s Brexit minister, David Frost, on the other hand, said that there had been “no breakthroughs” over the Brexit checks and no “breakdowns” after a two-hour meeting with Sefcovic in London. The sides have now agreed to continue to try to find a solution before a ban on chilled meats including sausages and mincemeat is due to come into force. The UK has extended the grace period for checks on British meat products heading to Northern Ireland, including sausages, until the end of this month.

It is worth noting that the terms for the UK’s departure from the EU have Northern Ireland effectively still anchored to the bloc’s single market. The aim of the arrangement is to preserve a single economic area on the island of Ireland and prevent fragmentation that could endanger the peace agreement. However, it has also erected trade barriers between the region and the rest of the UK.

Britain has complained that the EU is enforcing checks on goods moving from the UK to Northern Ireland too strictly. EU has, however, refused to back down and argued that unless if checks are enforced between Britain and Northern Ireland, then goods can enter the bloc’s single market without abiding by the bloc’s standards. The EU leaders in a joint statement said that the relations with the UK should remain “mutually beneficial” and can under no circumstances undermine the integrity of the Single Market, the Customs Union or the EU’s decision-making autonomy.

READ | Frost on meeting on post-Brexit rules in NIreland