At London Zoo, in the United Kindom, a visitor was taken aback to witness a handbag inside a cage instead of the animal that was supposed to be there. Read more 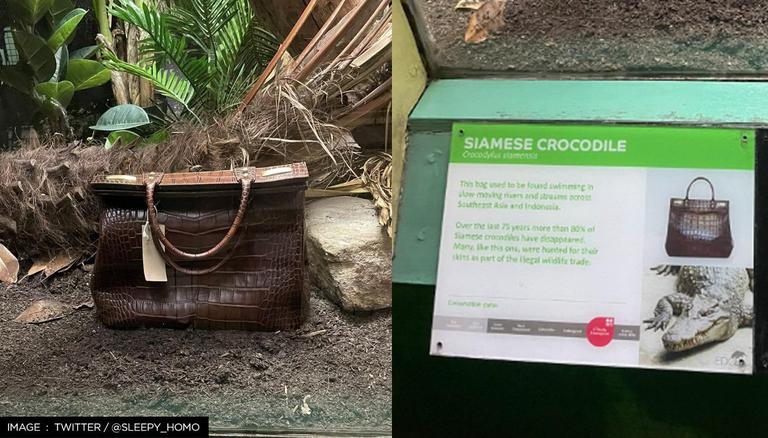 
At London Zoo, a visitor was taken aback to witness a handbag inside a cage instead of the animal that was supposed to be there. This incident came to light when the visitor's photo of a crocodile’s cage at the London Zoo in the United Kingdom went viral on social media. Rather than a Siamese crocodile, a brown leather bag made of crocodile skin was placed inside the enclosure. As per the Mirror report, this initiative was taken to give a strong message about the importance of conservation.

A Siamese crocodile, which is a critically endangered species of reptile endemic to places like Indonesia, Thailand, Vietnam, and Cambodia, was intended to be the centrepiece of the cage, but the sizable brown handbag made of crocodile skin stood in its place.

According to the MyLondon report, the world's oldest scientific zoo, London Zoo, which is located in Regent's Park in the UK capital, even installed a poster to inform visitors about the Siamese crocodile, including information on why the creatures are now so scarce in the wild.  The bag was seized by UK border officials at a London airport in 2018 and it was handed oer to the zoo authorities in order to highlight the impact that the illegal wildlife trade is having across the world, as per BBC.

'Over 80% of Siamese crocodiles have disappeared'

The poster placed beneath the enclosure revealed that this species of crocodile is critically endangered. The placard furtpicture on Twitter, applauded the zoo for not restricting in spreading awareness of the negative effects that poaching and other forms of the illicit wildlife trade can have on theher read, “This bag used to be found swimming in slow-moving rivers and streams across Southeast Asia and Indonesia. Over the last 75 years more than 80% of Siamese crocodiles have disappeared.” It also added, “Many, like this one, were hunted for their skins as part of the illegal wildlife trade.”

The zoo visitor, who shared the  animal kingdom. The tweet which was shared on August 1 garnered over 398k likes.

Take a look at the crocodile leather handbags

London zoo not pissing around pic.twitter.com/C9cxoDCba2

In addition to this, Dr. Ben Tapley, curator of reptiles and amphibians, expressed his happiness that the awareness against poaching has been growing. According to the BBC report, Tapley said, “It is great to have all these fantastic animals here but the handbag has caught people's eye". He continued by saying, “We wanted to educate our visitors about it and create a talking point. Anything which shines a spotlight on the illegal trade is great."

Over 1 billion animals are slaughtered each year for their skins or hides, according to PETA. In December 2021, Louis Vuitton and Gucci came under criticism after a PETA investigation revealed that the fashion firms were utilising snakes and lizards that had been brutally slaughtered in Indonesian "slaughterhouses" to make accessories, Newsweek reported.

Notably, it is common practice to hunt reptiles like pythons, caimans, rat snakes, monitor lizards, tegu lizards, alligators, as well as crocodiles for their skins. Many are collected directly from the jungles of Indonesia, Vietnam, Cambodia, and Thailand, and some are cultivated specifically for use in fashion.

As soon as the post went viral on Twitter, people praised the zoo for the initiative, stressing that it was to save animals like the Siamese crocodile.

One person said: "That’s the kind of zoo I can get behind! No live caged animals, just the consequences of humans."

"It's not even a cute bag...I get way animals gettin revenge now cuz what you mean you killed my family to make this ugly shit?"a Twitter user said. "It should be taken seriously," said another.