Marble Arch Mound has somehow turned a source of jeering and mockery on social media since July when it was officially inaugurated for the tourists. 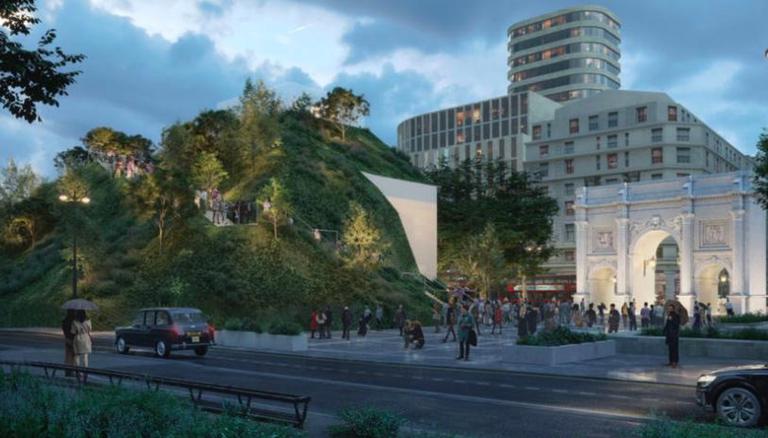 
London’s temporary landscape installation ‘Marble Arch Mound’, an $8 million tourist attraction that brought a slew of keen tourists to inspect how bad it was last year is now closing down just six months after the bad performance. “Underwhelmed,” is what a tourist had described to The Guardian newspaper adding that there was hardly a great landmark one could pick to view at the site, sarcastically pointing out at “lovely view of Battersea Power Station.” “We came to have a look at it because there had been so much adverse publicity,” a couple on holiday named by the newspaper as Paul and Susie Mulley from Brentwood, Essex told the newspaper reporter.

And now, the much irksome £6 million ($8.15 million) so-called tourist attraction for all wrong reasons, overseen by Westminster Council has decided to shut doors. Marble Arch Mound has somehow turned a source of jeering and mockery on social media since July when it was officially inaugurated for the tourists. Tickets were being sold free of cost on Mound's official website and were available at the entrance for the last of visits before the closure.

Oh apparently the Marble Arch Mound is closing this weekend. Here’s some of my photos of it.
The less than impressive views and then the interior of it! pic.twitter.com/xI4ibvs870

Saw the Marble Arch Mound for the first time today. It reminds me of those abandoned theme park photos. pic.twitter.com/qqJlxcjU3A

The site was located on the corner of Hyde Park and Oxford Street and hosted a light exhibition inside. While the Westminster Council called London’s The Mound, a part of the "smarter, greener" future for the borough with spectacular views and greenery, visitors were stunned to find that there was not even one element of the attraction on the artificial hill and climbing the 130 stairs was just not worth it. The Marble Arch Mound, although, opened with much fanfare last year beside the UK capital's one of the busiest intersections overlooking Hyde Park and Oxford Street. Customers that paid £4.50 ($A8.50) for tickets complained that there was the repulsive sight of scaffolding and rubble at the 25-meter monument.

I found it odd they didn't make more of the interior, but think they meant to - the info describes a 'hollowed out space that will be used as a café, shop and exhibition space'.

Instead you find an emptyish storage area.

Perhaps it is unfinished, hence all that rubble outside. pic.twitter.com/gVkICdS5eF

There's also apparently a light show of some sorts, also not there at the moment, which may explain some of the random cables scattered around. pic.twitter.com/ZfrxYInTTA

But the Council told The Guardian newspaper that the monument “has done what it was built to – drawn crowds and supported the recovery in the West End.” It said, "We're really pleased that nearly 250,000 visitors have come to Westminster to see The Mound and the terrific light exhibition inside. Those visitors have gone on to spend money in shops, bars, and restaurants across the West End – helping local businesses to get back on their feet.” But a petition on change.org is calling to stop the closure, arguing that the site is a "celebration of life during the Covid deconfinement” and is “both a piece of art and a piece of community - it must not be cut down in its prime especially in light of the money and joy already invested into it."