“They're a marvel for gemologists and historians alike, and it is real thrill to be able to bring these treasures to light," chairman of Sotheby's said. 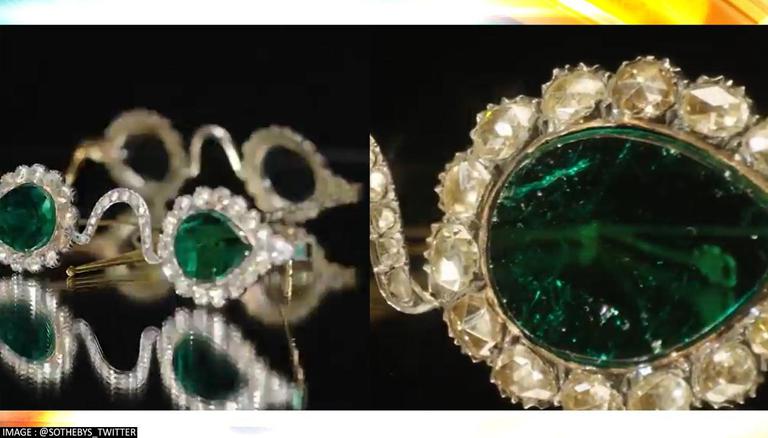 
Two stunning pairs of diamond and emerald gemstones from India will go on sale in Sotheby’s upcoming Arts of the Islamic World and India auction scheduled for 27 October in London, Sotheby’s announced in an official release. The incredible gemstones, being described as one-of-a-kind, have widely been observed by historians and have never before been on public view before or offered at auction. The two Mughal-era gemstones from India could sell for up to $3.5 million. They each come from an unknown “princely treasury” and comprise mesmeric “Gate of Paradise” glasses that are drop-shaped into two, and consist of flat-cut emeralds that may be weighing an estimated 27 carats. The design is set in silver and gold, and the lenses are approximately 2.6 cm x 2 cm x 0.295 cm.

According to Sotheby’s the spectacles originated in 17th century Mughal India, where they were commissioned by an unknown prince. The jewellery has symbolic significance from the Indian perspective as such gems find mention in Ratna Shastras and are widely treasured. The rose-cut diamond on the jewellery weighs more than 200 carats and an emerald weighs at least 300 carats and was designed around 1890. While the original patron of gemstones is unknown, the auction centre states that they “would no doubt have been in the reserve of an emperor.” In an episode of Expert Voices, shared by London’s auction centre, writer and historian William Dalrymple describes how the diamonds were commissioned by one of the Emperors from the great Mughal period.

“The lenses were cleaved from the finest diamonds and emeralds of the era, and were designed not only as practical objects but to signify one of the greatest periods of gemstone connoisseurship,” described Sotheby’s.

These spectacular glasses feature lenses cleaved from the finest diamonds & emeralds of the era.

“These extraordinary curiosities bring together myriad threads—from the technical mastery of the cutter and the genius of craftsmanship to the vision of a patron who chose to fashion two pairs of eyeglasses quite unlike anything ever seen before,” said Edward Gibbs, chairman of Sotheby’s Middle East & India.

“They are undoubtedly a marvel for gemologists and historians alike, and it is a real thrill to be able to bring these treasures to light and to offer the world the opportunity to wonder at their brilliance and the mystery behind their creation.”

Designed for enlightenment, to ward off evil

The jewellery may have been designed for enlightenment and ward off evil, experts believe, and they go on sale after they toured New York, Hong Kong and London, reports reveal. According to the chairman of Sotheby's Middle East and India, Edward Gibbs the pieces are an exceptionally rare example of India’s Mughal jewellery craftsmanship. “There are no others like them," the latter told CNN. The glasses "could only have belonged" to an emperor, his inner circle or a high-ranking courtier, the outlet quoted Gibbs as saying. Diamonds had symbolic significance with "celestial light" and "enlightenment" during the primitive Indic society, and the gemstones were believed to be the  "vehicles for astral forces" that could channel the auspicious intentions of the universe, Gibbs also reportedly said.

READ | PM Modi invites people for e-Auction of gifts and mementos received by him; Check link

The green colour also holds significance as it links to peace and paradise, salvation, and eternal life in Islam, the religion of the Mughal rulers. The experience may have "led you through the gateway into paradise" by offering "a glimpse of the verdant sea of the green paradise that awaits," Gibbs told the network. The Indian subcontinent was widely known for its reserves of gems and jewellery and the Mughals had made attempts to acquire and rule on more territory and be in possession of these treasures. Several court paintings throw light on the intricate details about the variety of gems treasured by the Mughal leaders.

WE RECOMMEND
India's investments in Afghanistan: What will Taliban make of its Parliament, dam & more?
How many episodes are there in 'Suno Chanda' Season 1? All you need to know
NCERT says it can't back textbook claim on Mughals rebuilding war-torn temples, sparks row
Archaeological Survey of India to fine tourists exceeding 3-hour visiting limit at Taj Mahal. Details here
It's exhausting to be fearless: actor Swastika Mukherjee