The Queen was seen taking the salute from balcony of Buckingham Palace to hundreds of thousands of Britons gathered to mark the 96-year-old’s Platinum Jubilee. 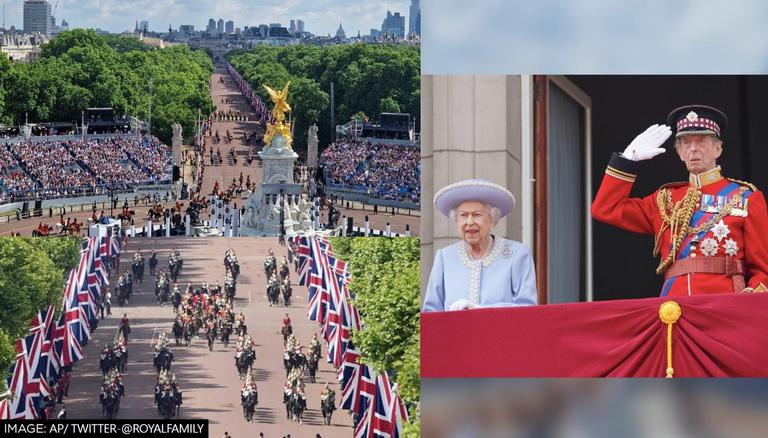 
As Britain’s Queen Elizabeth II became the first ever monarch to celebrate a Platinum Jubilee after 70 years of service, the day commemorating her historic reign, began with her symbolic “balcony appearance.” Queen Elizabeth II was seen taking the salute from the balcony of Buckingham Palace to hundreds of thousands of Britons gathered to mark the 96-year-old’s Platinum Jubilee as she completed 70 years on the throne.

Elizabeth ascended the throne on 6 February 1952, shortly after the death of her father, King George VI.

Catch a first glimpse of the #Queen as she steps out onto the balcony at #BuckinghamPalace to receive a salute from her parading troops.

Her Majesty is celebrating her #PlatinumJubilee with a special Trooping the Colour parade to mark her official birthday. pic.twitter.com/MhmaL3FCBU

The queen’s Platinum Jubilee is underway.

Four days of celebrations honoring Queen Elizabeth II’s 70 years on the throne began with Trooping the Color, an annual review of military traditions that has marked the sovereign's official birthday since 1760. https://t.co/77qf9MwYMd pic.twitter.com/om5E3nhYhX

The British Queen made her first appearance during Trooping the Colour, an annual military review that marked the sovereign’s official birthday since 1760. She was seen holding her cane due to "episodic mobility” issues and stood alongside her cousin, the Duke of Kent on the Buckingham Palace balcony as at least 70 aircraft flew overhead in her honour. The colours were trooped by Britain’s 1st Battalion, Irish Guards, and more than 1200 officers and soldiers from the Household Division. The first Trooping the Colour parade was held in her first appearance as Princess Elizabeth in 1947. 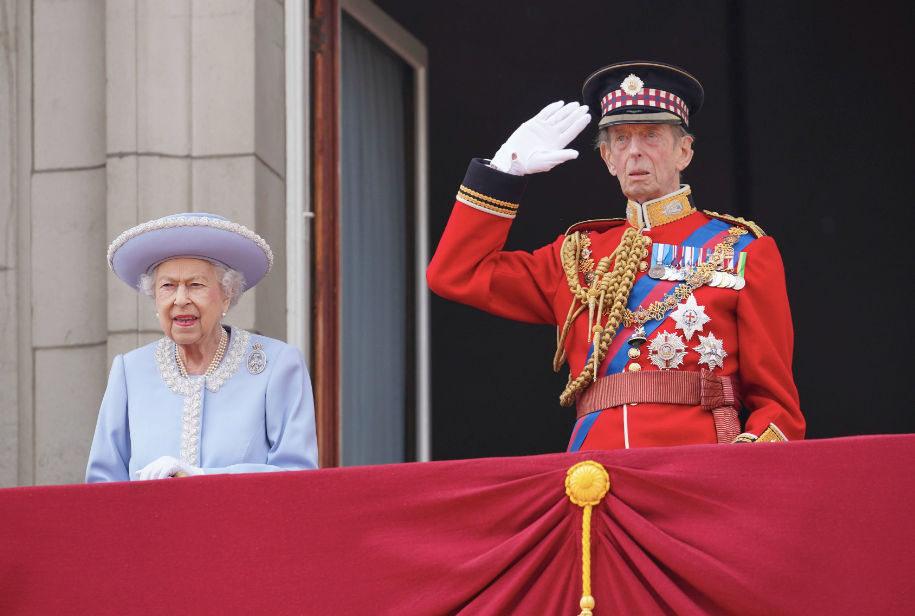 A display of military pageantry on Horse Guards Parade, together with hundreds of Army musicians and around 240 horses was displayed as the United Kingdom cherished British Sovereignty for over 260 years. A Royal Gun Salute was also fired. It was the first time ever that Queen Elizabeth II did not take part in the parade but only took a salute from the cavalry from her palace’s balcony in course of 70 years of reign. She was also joined by other royal family members as Royal forces held a traditional military fly-past. 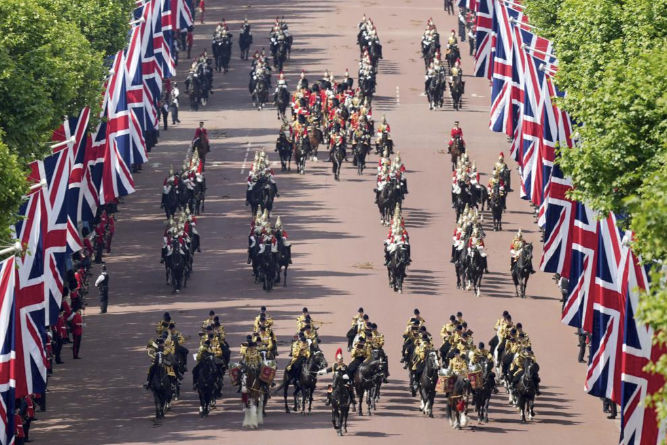 (Scenes on The Mall as the Royal Procession prepares to leave Buckingham Palace for the Trooping the Color ceremony at Horse Guards Parade, central London, Thursday, June 2, 2022. The events over a long holiday weekend in the U.K. are meant to celebrate the monarch’s 70 years of service. Image: Dominic Lipinski/PA via AP)

READ | Queen thanks nation ahead of Platinum Jubilee; says 'continue to be inspired by goodwill'

Four days of celebrations to mark national moments of reflection

Events and initiatives are lined up, including the service of thanksgiving on Friday at St. Paul’s Cathedral in London, as well as a concert at Buckingham Palace on Saturday and a pageant staged by thousands of performers drawn from schools and community groups around the country on Sunday. The four days of celebrations will also mark national moments of reflection on the Queen’s 70 years of service in the UK. (Queen is expected to join the working members of her family again there at the end of the Trooping the Color event, Image: AP)

Members of The Royal Family depart Buckingham Palace as they travel towards Horse Guards Parade for Trooping the Colour. #PlatinumJubilee #HM70 pic.twitter.com/vwJsVu6mzZ 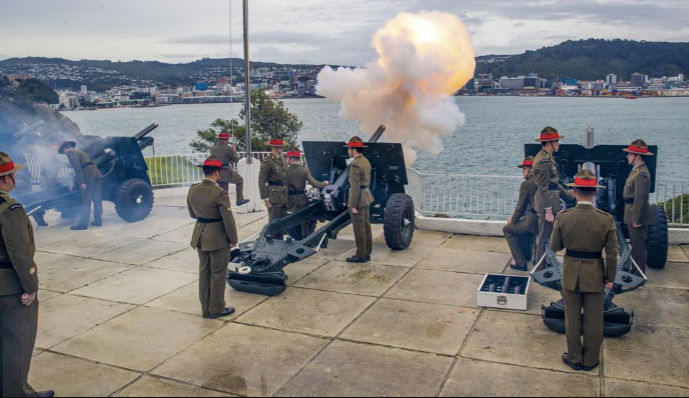 (The Royal Regiment of New Zealand Artillery, using four 25-pounder guns, react during their 21-gun salute at Point Jerningham, to mark the 70th anniversary of the coronation of the Queen, Elizabeth II, in Wellington, New Zealand. Image: AP)

Buckingham Palace has installed large screens, set up in St James’ Park for the members of the public in the UK to be able to watch the spectacle live. Queen Elizabeth II made her historic appearance donning a blue coat and hat which is designed by her personal stylist of more than 20 years named Angela Kelly. The attire worn by the British monarch during her balcony appearance is the same one she wore in her official jubilee portrait which was released to the Britons earlier yesterday (June 1).