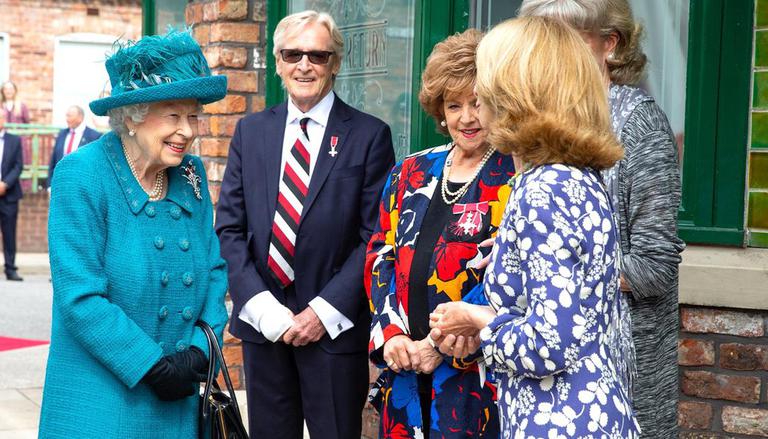 
UK’s Queen Elizabeth II on July 8 took a walk down the set of the world’s longest-running television soap opera, ‘Coronation Street’ and hailed the popular show’s entire cast as “marvellous” for keeping through the COVID-19 pandemic. The British show is even recognised by the Guinness World records as the world’s longest-running television soap as it is has been on air for 60 years. The 95-year-old monarch walked through the exterior set that included the show’s famous cobbled street and Rovers Return pub.

Coronation Street is deeply honoured to have Her Majesty The Queen pay a very special visit to the cobbles today.

The royal visit took place to celebrate the programme’s 60th year and the whole team’s historic achievement of continuing to entertain the entire nation throughout the coronavirus pandemic. The show’s production was paused briefly twice and has even switched to socially distanced episodes with actors staying at least 6.5 feet apart. The crew used camera tricks to make them look closer. Outside the Rovers return, the queen talked to the group of actors including 89-year-old Bill Roache, who has appeared since the first episode as Ken Barlow, known for romancing women.

The Queen was heard saying, “It's really marvellous that you've been able to carry on.” To which Roache said, “Well ma'am, you're the one who's carried on” prompting laughter from other cast members. He was joined by Barbara Knox and the rest of the crew to talk about the challenges of filming two metres apart while making it look like characters in the same family were much closer. According to the official statement by Coronation Street, Queen also discussed how the writers adapted to the plotlines in order to reflect the COVID-19 lockdown situation.

Of the royal visit, the show said, “Cast members including Bill Roache and Barbara Knox joined crew to chat about challenges of filming two metres apart while making it look like characters in the same family were much closer. They also discussed how the writers adapted the plotlines to reflect lockdown, how everyone had to adapt when key cast had to self isolate and how the show managed to still do stunts such as ‘hit and runs’ whilst maintaining social distancing.”

📺 Today The Queen is visiting the set of the world’s longest running soap opera: Coronation Street.

Several presents were gifted to the Queen Elizabeth II by cast members Mollie Gallagher (Nina Lucas), Liam Bairstow (Alex Warner) and Amy Barlow (Elle Mulvaney). These gifts included an original ‘Corrie Cobble’ from the set opened by the monarch back in 1981,  specially engraved by local stonemasons, an early edition bottle of 60th Anniversary ‘Weatherfield Spirit’ Gin with a pair of Meehart Manchester Skyline gin glasses and a bag of ‘Corrie’ goodies including a signed Anniversary book and some Newton & Ridley beer mats for the Royal table.