Queen’s Coffin In London For Final Night At Buckingham Palace

Queen’s coffin in London for final night at Buckingham Palace 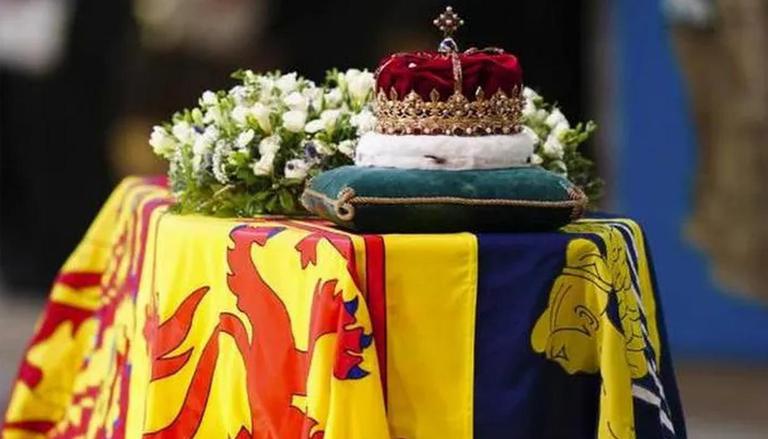 
London, Sep 13 (PTI) The coffin of Queen Elizabeth II arrived in London on Tuesday evening for a final night at Buckingham Palace before its journey to the Westminster Hall on Wednesday for Lying-in-Rest ahead of the state funeral on Monday.

Queen Elizabeth II, the UK's longest-serving monarch, died on September 8 at the Balmoral Castle in Scotland after reigning for 70 years. She was 96.

The national anthem played as the coffin was flown from Edinburgh Airport to London, accompanied by the Queen’s daughter Princess Anne on a Royal Air Force (RAF) aircraft that has been previously used for humanitarian aid missions.

In an emotional statement, Anne – the Princess Royal described the journey with her late mother's coffin from Scotland to England as an “honour and privilege”.

“I was fortunate to share the last 24 hours of my dearest Mother’s life. It has been an honour and a privilege to accompany her on her final journeys,” she said in a statement.

“Witnessing the love and respect shown by so many on these journeys has been both humbling and uplifting. We will all share unique memories. I offer my thanks to each and every one who share our sense of loss. We may have been reminded how much of her presence and contribution to our national identity we took for granted,” she said, while expressing gratitude for the support offered to her “dear brother,” King Charles III as he takes on the role of the monarch.

On landing at the RAF Northolt air base in west London, the cortege began its journey by road into central London.

King Charles III, who was in Northern Ireland earlier on Tuesday, had arrived at the royal residence in time to receive the coffin with Queen Consort Camilla.

The oak coffin was placed in a state hearse as a royal salute was given by an RAF guard of honour to set it off on its journey to the palace.

At the grand entrance of Buckingham Palace, the hearse was received by a guard of honour formed by the King’s Guard and a bearer party then took the coffin to the Bow Room in the palace where it will be placed on trestles in the centre of the room.

Besides the senior royals including the Queen’s children and grandchildren, the Rt Revd Dame Sarah Mullally, Dean of the Chapels Royal, conducted prayers followed by a rota of chaplains to the King keeping watch over the coffin overnight.

The Imperial State Crown and a wreath of flowers was placed on the coffin as the prayers were said in the presence of the King and other members of the royal family.

The coffin will remain overnight in the Bow Room before a royal procession on Wednesday afternoon to Westminster Hall for the start of the Lying-in-State when the public will be able to file past in Westminster Hall. The Bow Room is where the Queen has entertained several high-profile figures over the years, including former US President George Bush, King Abdullah of Saudi Arabia and Premier League footballers.

The room was formerly known as the Bow Library and is situated in the west wing of Buckingham Palace behind Marble Hall.

It was named after the window that runs along one side and the room also has direct access to the palace's garden.

Despite the pouring rain, crowds remained steadfast with umbrellas in the queue that has already been forming of members of the public preparing to pay their respects at the Lying-in-State from Wednesday evening. PTI AK VM VM