A rare 16th-century dish that was hidden away in a drawer sold at auction for more than  £1 million, which is more than ten times its original estimate. 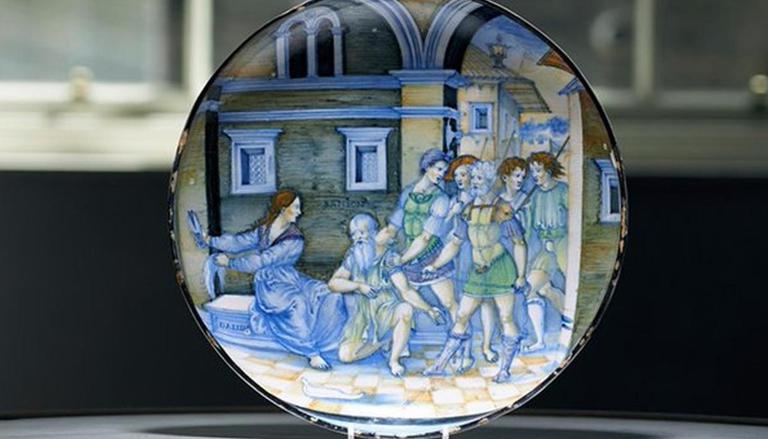 
A rare 16th-century dish was recently sold at auction for more than  £1 million, which is more than ten times its original estimate. The dish represents the biblical story of Samson and Delilah, it was discovered hidden away in a drawer. Nicola da Urbino is thought to have created the plate between 1520 and 1523. It measures 27 centimetres in diameter. The maiolica dish was predicted to earn between £80,000 and £120,000 (Rs 81 lakh and Rs 1 crore) but it was sold for a record-breaking £1,263,000 (Rs 12 crore) during an online auction on Wednesday.

According to CNN, the event was aired online, bids poured in from prospective buyers by phone and email. An unidentified source submitted the winning bid. The artefact was one of almost 400 objects identified as belonging to Lowood Estate, a stately rural house in the Scottish Borders. Pictures, furniture, books, silver and works of art were all on display at the event, which was hosted by British auctioneers Lyon & Turnbull.

The dish was discovered stashed away in a drawer

A representative for Lyon & Turnbull told CNN Thursday that the dish was discovered stashed away in a drawer by the firm's European ceramics specialist, who recognised it as a "unique piece of high quality." Celia Curnow, a maiolica specialist, described the exquisite dish on the firm's website, saying the potter who made this, Nicola da Urbino is recognised as the master of the 'istoriato' style of maiolica decoration in early 16th century Italy.

Curnow believes the dish is monogrammed and dated back to 1521. Gavin Strang, Lyon & Turnbull's managing director and head of private collections, was on the rostrum of the Edinburgh auction house when the dish was sold. On Thursday, he told CNN that the mood during the auction was electric, and that "there was a wave of applause when the hammer fell."

Nicola da Urbino was the Italian ceramicist from Castel Durante in Marche who brought the new istoriato style into painted maiolica, in which the entire surface of a plate or charger is devoted to a single realistic scene. Nicola's scenes were frequently derived by freely adapting woodcuts from Romances or Latin classics, such as the illustrated Ovid's Metamorphoses printed in Venice in 1497.