British Prime Ministerial hopeful Rishi Sunak visited Bhaktivedanta Manor temple in UK along with his wife Akshata Murthy on the ocassion of Janmashtami. 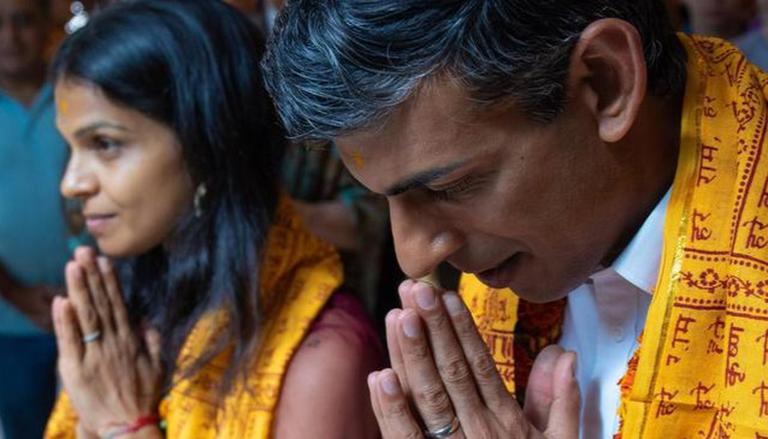 
Former UK Chancellor and British Prime Ministerial hopeful Rishi Sunak on August 18 visited Bhaktivedanta Manor temple along with his wife Akshata Murthy, on the occasion of Janmashtami. Notably, Indian origin Sunak's wife Akshata Murthy is the daughter of Indian Software baron NR Narayana Murthy. It is also worth mentioning that on the political front, Sunak is currently trailing behind his rival, Foreign Secretary Liz Truss in the PM race.

Sunak took to social media, shared an image of himself and his wife offering prayers at a temple, and stated:

Today I visited the Bhaktivedanta Manor temple with my wife Akshata to celebrate Janmashtami, in advance of the popular Hindu festival celebrating Lord Krishna’s birthday. pic.twitter.com/WL3FQVk0oU

Every year, Janmashtami is celebrated in honour of Lord Krishna. Krishna, the human avatar of Lord Vishnu, was born on this day to defeat Mathura's evil ruler, Kansa. Krishna Janmashtami 2022 is being celebrated across India on August 18 and 19.

According to a new survey of Tory voters, Foreign Secretary Liz Truss is currently holding on to a firm lead over former Chancellor Rishi Sunak in the race to be elected Conservative Party leader and British Prime Minister. Truss has a 32 percentage point lead over Sunak. The Conservative Home website survey of 961 party members, who either already have or will be casting their postal or online ballots in the leadership election, found Truss at 60% and Sunak at 28%.

The polling will officially closed on the evening of September 2 and the votes will be tallied for the results to be declared in time for the House of Commons resuming its sitting on September 5.

On July 7, Boris Johnson had announced his resignation after more than 50 of his ministers stepped down from their posts. He announced that he will continue in the post till his successor is elected by the Conservative party. This came amid questions surrounding Johnson’s handling of the Chris Pincher row, who resigned last week from the post of deputy chief whip. Reports had emerged that Pincher groped two men at a private members’ club and Johnson was aware of the allegations against the Minister in 2019.