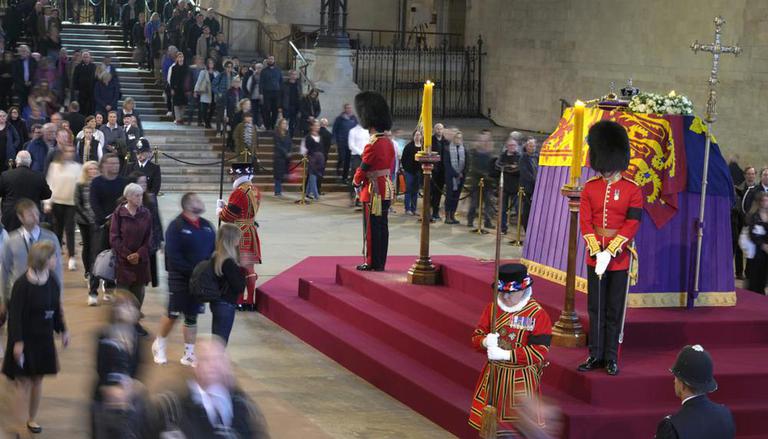 
A man was detained at the historic hall where Queen Elizabeth II is lying in state and was accused of violating public order for allegedly grabbing the coffin. 28-year-old Muhammad Khan, from east London, was charged on Saturday with violating 'Section 4A of the Public Order Act' for acting in a way that was intended to cause alarm, annoyance, or distress in Westminster Hall. According to The Guardian report, Khan reportedly attempted to grab the Queen's coffin and was subsequently charged with a public order offence.

In Westminster Hall, where the Queen has been kept, there were claims of a "disturbance" on Friday night. It was said that someone was spotted racing up the catafalque stairs and touching the coffin. According to the report, the Metropolitan police responded to apprehend the man just before 10 PM (local time) on Friday, September 16, which was the second full day where mourners were free to pay their tributes to the former monarch, hours after senior royals conducted a vigil.

Furthermore, on Monday, September 19, the day of the Queen's funeral, Khan is scheduled to make an appearance while being held at Westminster Magistrates' Court.

According to a statement from Scotland Yard, “Muhammad Khan, 28, of Barleycorn Way, Tower Hamlets, was charged on Saturday, September 17, with an offence under Section 4A of the Public Order Act; behaviour intending to cause alarm, harassment or distress.”

In addition to this, British broadcasters moved away from the action and displayed the view from outside parliament at the time of the occurrence, The Guardian reported.

It is pertinent to mention that Khan is the second individual to be accused of breaking the law while waiting in line to view the Queen's coffin laying in state.

According to the Independent report, in the queue at Victoria Tower Gardens on Wednesday, a 19-year-old man reportedly exposed himself and pushed mourners in the back. Adio Adeshine allegedly entered the River Thames in an effort to escape arrest before emerging and being taken into custody.

After making an appearance at Westminster Magistrates' Court on Friday and being accused with two charges of sexual assault along with two counts of violating a sexual harm prevention order, he was remanded in jail.

As people waited in long queues to pay their respects to the late monarch before her coffin is transported on Monday morning, the lines became even longer throughout the weekend.

Meanwhile, thousands of people gathered to pay tribute on Saturday, as all eight of Queen Elizabeth II's grandchildren held a silent vigil by her coffin. According to the Associated Press report, the coldest night in months and delays that may last up to 16 hours were endured by mourners as they gathered in a queue that wrapped around London. Since the public was initially allowed entry on Wednesday, the number of mourners has progressively increased, and there is now a line that wraps around Southwark Park and is at least five miles long.