The construction of a swimming pool inside Rishi Sunak's luxury mansion garnered public anger as parts of England are combating drought and water shortage. 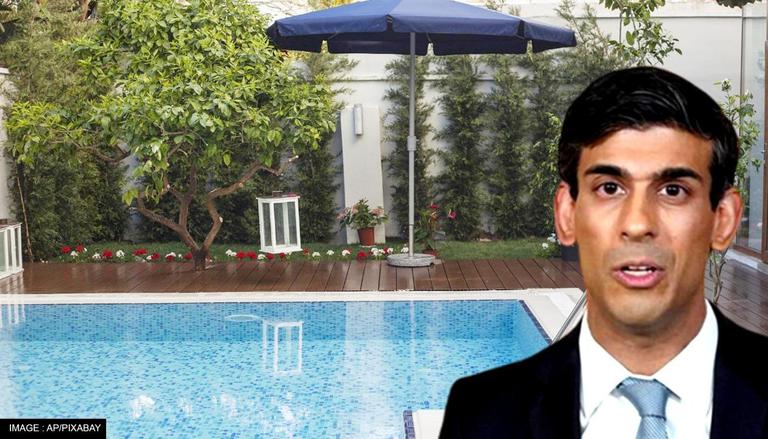 
A month after UK PM contender Rishi Sunak's wife was embroiled in a row for exhibiting their royal living style, a similar controversy erupted after pictures of a Rs 3.8 crore swimming pool construction surfaced on the internet. According to a report by the Daily Mail, the construction of a swimming pool inside his luxury mansion garnered public anger as parts of England are combating an unforgiving drought and water shortage.

This is not the end of the luxury constructions that are currently under construction inside the luxury mansion of the Indian-origin contender. The report claimed that Sunak is also building a gym and tennis courts at his £2 million Georgian manor house near Northallerton.

The report said that the 42-year-old Sunak spends his weekends with his wife Akshata Murty and their two children. The matter came to the limelight after aerial footage exhibiting the construction of the pool in full swing went viral on social media platforms.

The anger turned more grave as the government shut public swimming pools in Richmond citing soaring energy costs due to the ongoing Russia-Ukraine war. Earlier last month, the top UK PM contender's wife, who was accused of tax affairs and possessing a US permanent resident card, landed in trouble as netizens spotted her using "expensive tea cups" at a time when the country witnessed a massive tax surge.

A widely shared video claimed that the footage was captured when she had gone outside her house to serve snacks and tea for the journalists, who were waiting for her husband's byte over the dramatic mass resignations of ministers on July 6. Though initially, the kind gesture of Murty attracted appreciation from social media users, the circumstances took a u-turn when someone spotted that the teacups belong to a brand named Emma Lacy that costs 38 pounds each (nearly Rs 3,600).

"Many thanks to @RishiSunak’s wife who very kindly brought us tea and cookies outside her house! PS It was really good tea," Josh Gafson of Sky News shared the photographs with words of appreciation for Sunak's wife. Similar tweets were also made by the journalists who were waiting outside Sunak's house. However, several netizens were quick to criticise Murty for using such expensive teacups. Some netizens claimed the cost of teacups could feed a family for two days.

It is worth mentioning here that the former UK Chancellor, launched trouble for Prime Minister Boris Johnson, by tendering his resignation with his colleague and health minister Sajid Javid. His abrupt decision led to the mass resignation of ministers, which eventually led to the unceremonious exit of Johnson, who had proved his majority in the Parliament last month. According to Sunak, he has the support of more than 80 to 100 deputies and is the most "suitable candidate" for the post of UK Prime Minister.