'Family means everything to me' | UK: Rishi Sunak's Wife, Children Join His Poll Campaign As Race To Become PM Heats Up

As the race for the UK's leadership heats up, former Treasury Secretary Rishi Sunak was joined by his wife & two daughters during his recent election campaign. 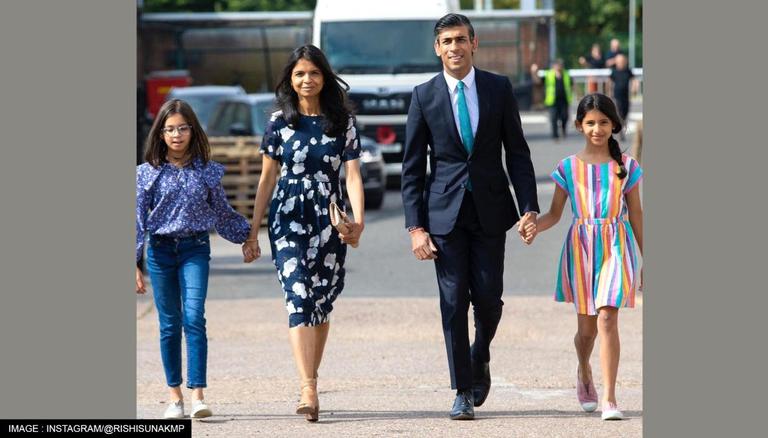 
As the race for the United Kingdom's leadership heats up, former Treasury Secretary Rishi Sunak and his opponent Liz Truss are leaving no stone unturned to garner the support of ruling Conservative party members who will finally decide the winner. Meanwhile, the family members of Sunak also joined the election campaign on July 23, giving much-needed moral support to him.

The Conservative leader was joined by his wife Akshata Murthy, and their two daughters in Grantham. "Family means everything to me. So grateful to have the support of my family at yesterday’s (July 23) event in Grantham [sic]," Sunak wrote on Instagram sharing a pic with his wife and daughters.

In an attempt to win over Conservative Party supporters, Sunak focused on the delicate subject of immigration on Sunday, July 24, by pledging a "healthy dose of common sense" approach. Meanwhile, the 42-year-old former British Chancellor also outlined a 10-point strategy to protect the country's borders if elected to power. He also pledged to use cruise ships to house illegal immigrants, limit the authority of the European Court of Human Rights (ECHR), and withhold funds from nations that refuse to take back criminals and failed asylum claimants.

'We need to inject a healthy dose of common sense into the system': Sunak

“The ECHR cannot inhibit our ability to properly control our borders and we shouldn’t let it. We need to inject a healthy dose of common sense into the system, and that is what my plan does,” Sunak wrote for 'The Daily Telegraph.' He further stressed that the UK cannot waste significant sums of taxpayer money on the contentious policy of deporting some illegal immigrants to Rwanda only for it to fail at the first legal hurdle.

“I will make the policy work and will do whatever it takes to implement it and pursue additional similar partnerships,” he remarked.

It is significant to mention here that Sunak, who has served as UK’s chancellor in Johnson’s government, topped the final ballot of MPs with 137 votes, followed by Truss with 113 votes. However, polls have suggested that Sunak is less popular among the Conservative Party whose MPs will cast votes for their preferred candidate in the month of August. Notably, the country is likely to get a new Prime Minister on September 5 at the latest.