UK Woman Inspired By Mexican Activists, Married A Tree To Save Park

UK Woman Kate marries a tree in her local park in the hope that it will stop developers from cutting it down; she was inspired by female activists in Mexico

Kate Cunningham a 34-year-old environmentalist in the UK has taken a drastic measure of marrying a tree in her local park in the hope that it will stop developers from cutting it down. The mother of two has announced that she will change her name to Kate Rose 'Elder', in honour of the species of the tree. The entire town was invited to join her friends and family at the wedding ceremony at Rimrose Valley Park in Litherland, Merseyside. Kate decided to get married to the tree as she was inspired by female activists in Mexico who held similar wedding ceremonies to raise awareness about illegal logging and land clearing.

Speaking to an international media firm Kate said, "I have been a protester marching in street demonstrations with thousands of other people but it doesn’t attract enough attention from people. All I want is that people to engage with the campaign and raise questions about the destruction of our green space. There are plenty of local people who aren’t even aware of what is happening. There is already too much pollution in our region and we desperately need a solution which addresses this; not one which will make it even worse."

READ | Even For Trump, It’s Been A Busy Stretch Of Media Attacks This Week 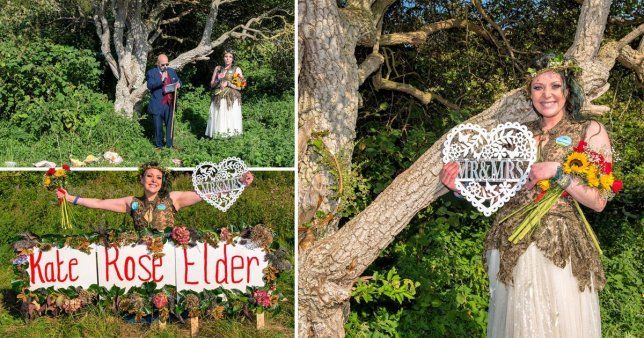 Kate had the backing from her boyfriend and her family to take part in the symbolic wedding ceremony. She said,

"My boyfriend is very supportive of my decision and has even helped me make props for the wedding. My oldest son was initially embarrassed when I told him I was going to marry a tree, but now he has decided to come to the ceremony. It means a lot to him to be there. My dad has been very supportive. He's been out in his van helping to organise everything for the big day.”

Dual carriageway to be built through the park

The Highways England has proposed Highways England proposes building a three-mile-long bypass through the Rimrose Valley in order to ease traffic congestion going into the Port of Liverpool and the city’s famous docks which will be built through the park. Kate hopes that her marriage will help her stop the £250 million plan for a dual carriageway.