"It must stop now and all those involved should be held accountable," the Prince wrote on Twitter denouncing the racist abuse faced by the players. 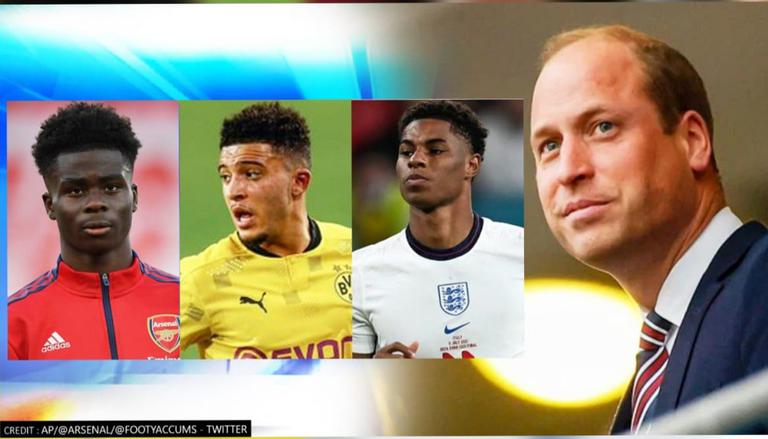 
UK's Prince William, who is also the president of England's Football Association, said on twitter that he was "sickened by the racist abuse" the three Black players had to face. "It must stop now and all those involved should be held accountable," he said.

I am sickened by the racist abuse aimed at England players after last night’s match.

It is totally unacceptable that players have to endure this abhorrent behaviour.

It must stop now and all those involved should be held accountable. W

On Sunday night, Marcus Rashford's penalty hit the post, and Bukayo Saka and Jadon Sancho's spot attempts were saved by Italy's goalie. After a 1-1 tie in extra time, Italy won the penalty shootout 3-2.

Racist vitriol was directed at all three players almost immediately on social media.

The Football Association of England issued a statement in which it said it was "appalled" by the "disgusting behaviour." The "unacceptable" abuse was also condemned by London police, who added that the "offensive and racist" social media remarks would be investigated. Sadiq Khan, the mayor of London, has urged social media companies to do more to hold perpetrators accountable.

UK Prime Minister Boris Johnson also wrote in a Twitter post, “There is absolutely no place for racism in football or anywhere else." "Those responsible for the disgusting online abuse we have seen must be held accountable - and social media companies need to act immediately to remove and prevent this hate.”

However, for one reason, users on the social media site were not receptive to William's message: Meghan Markle.

In a shocking interview with Oprah Winfrey and Prince Harry in March, the former duchess came forth. Meghan spoke at length about the alleged prejudice she faced from the royal family as well as the British press throughout the interview.

Many people are already questioning William's recent Twitter message, wondering why he's speaking out now rather than at the height of Meghan's supposed suffering.

One user tweeted, “Prince William wasn’t ‘Sickened’ by the racist abuse his sister in law suffered, in fact, he supported the family’s non response to defend her....”

Prince William wasn't "Sickened" by the racist abuse his sister in law suffered, in fact he supported the family's non response to defend her, specially after the "Meghan made Kate cry"Meghan was generous in saying "Kate was sweet" when she clarified that RF refused to defend her

Another quoted a tweet from ABC showcasing Prince William’s statement, saying, “Dear Prince William, where the f— have you been to defend your sister-in-law, Megan, The Duchess of Sussex against racism in the media & on social media...this screams performative.”

“it’s actually so mad to me that england loses a game and the first thing black people and women have to think about is their safety. this country is a nightmare,” wrote another commenter.

it’s actually so mad to me that england loses a game and the first thing black people and women have to think about is their safety. this country is a nightmare