The statue of Winston Churchill, who served as UK’s Prime Minister from 1940 to 1945, near the Edmonton city’s hall, Canada was found doused in red paint. 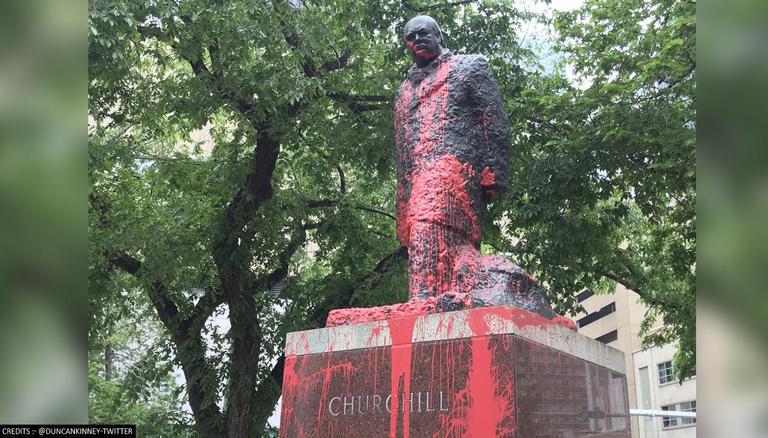 
The statue of Winston Churchill, who served as UK’s Prime Minister from 1940 to 1945, near the Edmonton city’s hall, Canada was found doused in red paint on June 17 morning. The statue of a British statesman was discovered vandalised in the eponymous Churchill Square which is a large tree-lined pedestrian square facing city hall. Images of the red paint-laden statute were later posted on the internet.

Following the incident, Mayor Don Iveson said in a statement, “I don't know the intent behind the vandalism, but I know historical monuments and sculptures, here and elsewhere, are at the heart of an emotional debate regarding what legacies and stories we venerate as a society.”

"I believe there are more productive ways to move society along towards a more inclusive and uplifting future [than] vandalizing city property,” he added.

As per CBC report, the graffiti incident involving Churchill’s statue was reported to Edmonton police at about 10:45 AM on Thursday (local time). The police have reportedly launched an investigation and workers contracted by Edmonton Arts Council removed the paint by the afternoon of the same day.

the winston churchill statue in edmonton seems to have received a bright and modern new update pic.twitter.com/nDlpekVyYs

I am personally disturbed and angered by the hateful vandalism of the mosque in #Edmonton. These acts of hate must stop — our Muslim community deserves to feel safe and welcome in our city. Full stop. pic.twitter.com/1rrjKIwYCq

Controversial figures from the past

Ever since the Black Lives Matter movement triggered with the death of George Floyd in the United States, the anti-racism protesters have called out the controversial figures from the. Last year, BLM demonstrators had started removing statues of historical figures in the UK when British PM Boris Johnson it was “absurd and deplorable” that Churchill’s statue on the Parliament Square should have been in danger.

While Johnson has showcased strong support for Churchill, according to reports, the former UK PM had expressed racist and anti-Semitic views. Some critics of his leadership have also blamed Churchill for denying food to India during the 1943 famine that killed more than a million people. Meanwhile, earlier this month, a statue of Edward Colston, an affluent personality in the 17th century who reportedly earned through the slave trade, was not only pulled down but was also thrown into the harbour in Bristol.

Winston Churchill is ‘lionized by Canadian politicians as one of the greatest statesmen of the 20th century. However, in 1937, he was quoted telling the Palestine Royal Commission: "I do not admit, for instance, that a great wrong has been done to the Red Indians of America or the Black people of Australia. I do not admit that a wrong has been done to these people by the fact that a stronger race, a higher-grade race, a more worldly wise race to put it that way, has come in and taken their place."