5 Bidens In India?: US President's Off-script story Got A Hilarious Reply From PM Modi 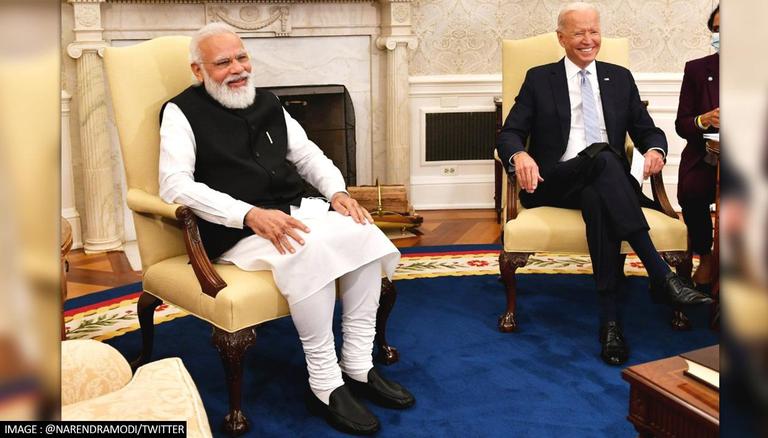 
US President Joe Biden on Friday pleasantly spoke about his possible India connection during his first meeting with Prime Minister Narendra Modi, recalling a story about a man with the Biden surname writing to him when he was first elected as a Senator in 1972.

Recalling the incident when he was in Mumbai as the US Vice President in 2013, Biden said that he was asked about if he has any relatives in India.

"I said I'm not sure but when I was elected as a 29-year-old kid in 1972, before I was sworn in, I got a letter from a person named Biden, last name, from Mumbai. I was never able to follow up," he said.

He said that the next morning, the press told him that there were five Bidens living in India.

Elaborating more on this, Biden jokingly said, "there was a Captain George Biden in the East India tea company. That is hard for an Irish person to admit. I shouldn't be so casual. I hope you are able to understand the humour. The end result was that he apparently stayed and married an Indian woman."

"I have never been able to track it down so the whole purpose of this meeting is to help me figure it out," Biden said, triggering laughter among those present in the meeting room, including Prime Minister Modi.

To this, the Prime Minister replied, "You talked about Biden's surname in India. You had talked to me about this earlier. Later I have tried to search many documents, I have also brought documents. Maybe we will be able to take this matter forward and maybe some documents could be of use to you." On PM Modi's repartee, the room burst into peals of laughter, prompting Joe Biden to reply, "Oh we are related."

WE RECOMMEND
US temporarily halts horse patrol in Texas amid outrage over treatment of Haitian migrants
US: After FDA, CDC endorses Pfizer COVID booster jabs for elderly, high-risk adults
First visuals of PM Modi meeting US President Joe Biden at the White House OUT
US: Biden administration to reopen detention camp at Guantanamo Bay for asylum seekers
'US not seeking a new Cold War', avers Joe Biden at UNGA amid strained ties with China