According to a senior administration official, the White House advisors along with President Joe Biden are discussing how to address the Afghanistan crisis. 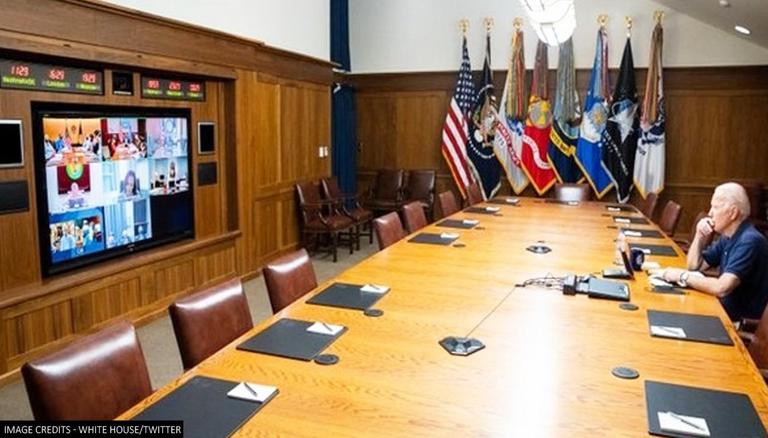 
After the Afghanistan government collapsed on Sunday with President Ashraf Ghani leaving the country and the Taliban's entry into the capital, speculations are going around over US President Joe Biden's next steps regarding the situation in Afghanistan. President Biden, who is right now at Camp David on his August vacation, has been attending regular briefings and is holding video conference calls with the members of the administration. The White House advisors are discussing how Biden should address the Afghanistan crisis.

US monitoring situation prevailing in Afghanistan

Earlier, the White House tweeted the photo of Biden having a virtual meeting with the Vice President, national security team, and senior officials to hear updates about Afghanistan.

This morning, the President and Vice President met with their national security team and senior officials to hear updates on the draw down of our civilian personnel in Afghanistan, evacuations of SIV applicants and other Afghan allies, and the ongoing security situation in Kabul. pic.twitter.com/U7IpK3Hyj8

Meanwhile, discussions are underway for Biden to come to speak publicly and may soon return to White House if he decides to deliver an address to the public. Biden is the fourth US president to confront challenges in Afghanistan and has insisted he wouldn't hand America's longest war to his successor. But the President will likely have to explain how security in Afghanistan unraveled so quickly, especially since he and others in the administration have insisted that it wouldn't happen.

READ | All eyes on Taliban leadership as Afghanistan falls to militants: Here's who's in charge

On August 15, Sunday, Afghan President Ashraf Ghani fled from Afghanistan to Tajikistan amid the chaos in the country. The Afghanistan government collapsed as the Taliban entered the capital and took control over Kabul as well as the Presidential Palace. According to sources, the Taliban will be soon establishing the Islamic Emirate of Afghanistan. Earlier, the situation started worsening after the US government started withdrawing troops from the country. The situation in Afghanistan has raised global concerns as the citizens are now looking for a safe haven. Also, people crowded at the airports to fly out of the country.

WE RECOMMEND
Afghanistan: Taliban has breakfast at Governor House after taking over Jalalabad
The rise, fall & return of Taliban: How US-backed Afghanistan government crumbled
Under-fire US President Joe Biden pins blame on Trump as Taliban re-conquers Afghanistan
Taliban warns India against military presence in Afghanistan, discusses links with Pak
Taliban takes control of US military assets in Afghanistan as more cities get captured