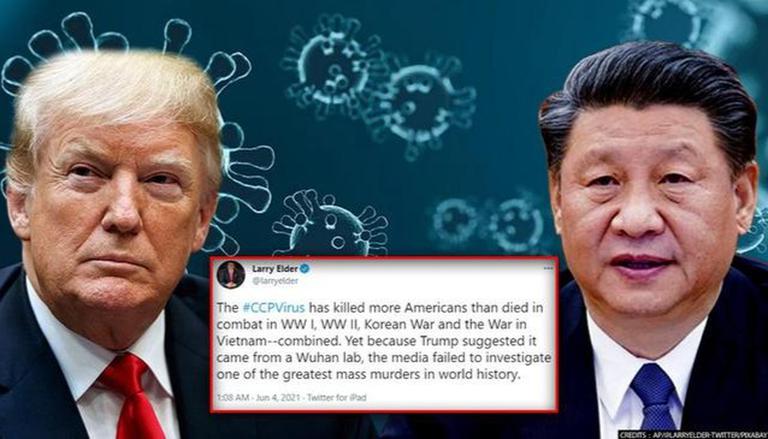 
Nearly 18 months after the outbreak of COVID-19, as the public discourse once again significantly falls back on the origins of the virus and its 'lab-leak' hypothesis to do with the Wuhan Institute of Virology (WIV), former US President Donald Trump claimed vindication as the clamour seeking a probe against China grows stronger. Citing the emails exchanged between the 'medical marvel' - as he has come to be referred to as in America for various reasons - Dr Anthony Fauci and China that has now come to light, the former President sought Ten Trillion Dollars as compensation to the USA and the World for the 'death and destruction' caused by COVID-19.

Substantiating his claims with new facts linking COVID-19 to the Wuhan virology lab that have now become the dominant theory on the origin of SARS-CoV-2, Trump claimed vindication in his statement as he said that even his 'enemies' have now begun to say that 'President Trump was right about the China Virus coming from the Wuhan lab'.

Consistent with his statement, even during his last year of Presidency when the pandemic struck, Trump continued to hold China accountable for the virus, though this was panned in the polarised US media landscape at the time. While the theories surrounding the lab leak weren't clear then, new reports showing a definitive link between the virus and the 'gain of function' research going on in Wuhan, Nicholas Wade's self-published papers and Dr Fauci's flip-flop after brushing the 'lab-leak theory' last year to now seeking a probe against China, has brought back the hypothesis - that COVID-19 may have escaped from Wuhan.

Trump's statement on Friday created new ripples in America as vocal citizens took to social media to review the former President's comments, which last year were shunned as excuses for his 'inability to manage the pandemic'. Several netizens, including certain Republicans, businessmen and prominent journalists, looked back in despair as they possibly pondered if they had ignored their own President, even as he demanded an investigation against the Wuhan Lab, and was amongst the first proponents of the probe across the globe, for whatever reason.

Donald Trump's allegations against China had even managed to elicit a response from Shi Zhengli, principal researcher and deputy director at the Wuhan Institute of Virology, from whose lab SARS-CoV-2 is alleged to have escaped, given her extensive and almost unparalleled work on bat coronaviruses, tracking down of the closest known ancestor of the SARS virus, gain of function research in the lead-up to the 2019 COVID-19 outbreak, and the fact that she herself feared the infection could have leaked from her lab when she was first told about patients suffering from an atypical pneumonia caused by a coronavirus in Wuhan on Dec 30, 2019.

Several netizens also struck a political note, citing how Trump's statements and call for a probe were possibly downplayed by the Democrats in the lead-up to the election. Amidst all the bickering between China and those demanding a probe, Twitter began buzzing on Friday morning with calls for re-election as they connected the dots between those preaching the 'natural emergence theory' - Democrats bid to win the 2021 election - Dr Fauci's flip flop. Moreover, Republicans have now started demanding for Dr Fauci to testify before Congress and reveals his connection with China's Wuhan lab.

Netizens wonder if Trump's claim was drowned out; demand 're-election'

Did we gaslight our own President?

I mean I didn’t like the man. But who cares about that. No one should.

The question is: Did we gaslight our own Chief Executive & Commander in Chief along w/ EVERY competent scientist of courage who demanded the Wuhan Lab be in consideration? https://t.co/Pykb3myViY

Every day it becomes clearer we were right, the Democrats used coronavirus to “win” the election. Fear, mass mail-in voting and economy-tanking infringements designed to ruin Trump’s humming economy. Crooks!

My thought from the beginning. Trump was taking it to China. China was not willing to allow a Trump reelection. Presidents with a strong economy is almost assured reelection. Bringing down the economy with the virus and help of paid for entertainers, Big business, Dems and news.

This is a major cover-up. We need a full Congressional investigation into the origins of COVID-19.

The #CCPVirus has killed more Americans than died in combat in WW I, WW II, Korean War and the War in Vietnam--combined. Yet because Trump suggested it came from a Wuhan lab, the media failed to investigate one of the greatest mass murders in world history.

And Fauci closed everything down just a few days later. I knew this guy was a tool of the left. I wouldn't be surprised to learn that China and Fauci conspired to release the virus and hurt Trumps chances of reelection bc Trump was kicking China's ass. https://t.co/Ap4c2U2ksw

It’s fascinating to see leftists who destroyed their own lives for the past year due to the pandemic... not care about the fact that Fauci said in 2012 that gain-of-function experiments could lead to a pandemic & yet funded those experiments at the Wuhan lab anyway.

One of the most dangerous developments recently is the shutting down of dissenting opinion in America. It’s happened w/the Wuhan lab leak, COVID, election integrity, etc. This isn’t China or North Korea. We are Americans. We are free. Dissent, question & speak freely! 🇺🇸🇺🇸🇺🇸

In a statement on Friday morning, the 45th President of the USA Donald Trump said, "Now everyone, even the so-called 'enemy,' are beginning to say that President Trump was right about the China Virus coming from the Wuhan lab. The correspondence between Dr. Fauci and China speaks too loudly for anyone to ignore. China should pay Ten Trillion Dollars to America, and the World, for the death and destruction they have caused!"

Amid the leak of 10,000 emails of the Director of the National Institute of Allergy and Infectious Diseases from 2020, Fauci has faced flake when an executive at EcoHealth which funded research at China's Wuhan Institute of Virology into the COVID-19 origin thanked Dr. Fauci for publicly stating that scientific evidence supports a 'natural origin for the Coronavirus and not a lab leak'. Dr. Fauci has now sought the help of Indian scientists for probing into COVID-19 origins at Wuhan.