As Donald Trump Mistakes ISIS-K For ISIS-X, Netizens Take A Jibe At Former US President

The Former US President Donald Trump mistakenly referred to the current blast claimant ISIS-K as ISIS-X during an interview. Here's how netizens reacted to it 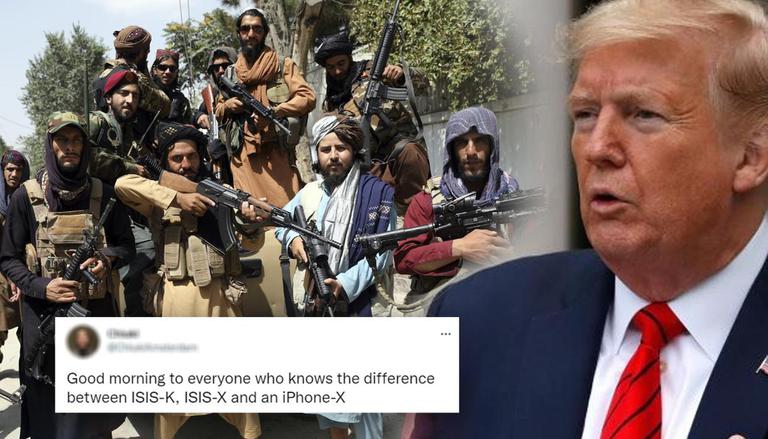 
Former US President Donald Trump anticipated the advent of a new Islamic State of Iraq and Syria (ISIS) after the Kabul Airport attack on Thursday and said that there will soon be an "ISIS-X." Speaking to Fox News, Trump lambasted his successor Joe Biden's Defence Forces retrieval policy from Afghanistan and said that the move gave birth to a new ISIS affiliate, ISIS-X. However, in reality the former President mistakenly referred to this name for the current ISIS-K. The quote did rounds on the internet and let netizens react with funny comments.

The Former US President Donald Trump mistakenly referred to the current blast claimant ISIS-K as ISIS-X during the interview. However, he swiftly made a twist and turned his mistake into a prediction. "They'll have an ISIS-X," he boldly asserted during the Fox News interview. This paved way for the netizens to react to the comment as a new meme. While a few pointed out that the comment was misinformed and ignorant, a few others decided to make jokes about it.

A Twitter user shared an image of Steve Jobs and said that there is a ‘new ISIS-X’ referring to the iPhone X. Meanwhile, another user wrote, “oh no, my high school nu-metal band was called ISIS-X,” while reacting to the comment. Some users also shared images of the popular Marvel comics’ X-men characters and said called it the new ISIS. While the comment became a huge meme where people made funny comparisons, a few others pointed out that the former President was doing ‘brand work’ for the terrorist organisation.

ISIS-X is the more heavily armored version of ISIS that they introduce half way through the video game to up the difficulty.

oh no, my high school nu-metal band was called ISIS-X

The Former US President, during the interview also claimed that the US army under his leadership had "knocked out 100 per cent" of the ISIS militant hideouts in Afghanistan. When asked about repeatedly-mentioned promises of US exit from Afghanistan during his tenure, Trump disclosed that he would have kept soldiers at the Bagram Airbase. "Would have blown up all the airbases but kept Bagram because it is located right near China and Iran," the Ex-Republican President explained. Meanwhile, he also expressed condolences to the kin of US personnel who were killed in Kabul twin blasts on Thursday.

READ | Donald Trump claims he anticipates the arrival of a new ISIS affiliate; calls it 'ISIS-X'