US President Joe Biden on August 6 made a numerical error during a speech and netizens were quick to point out his factual mistake, and even called him a “joke” 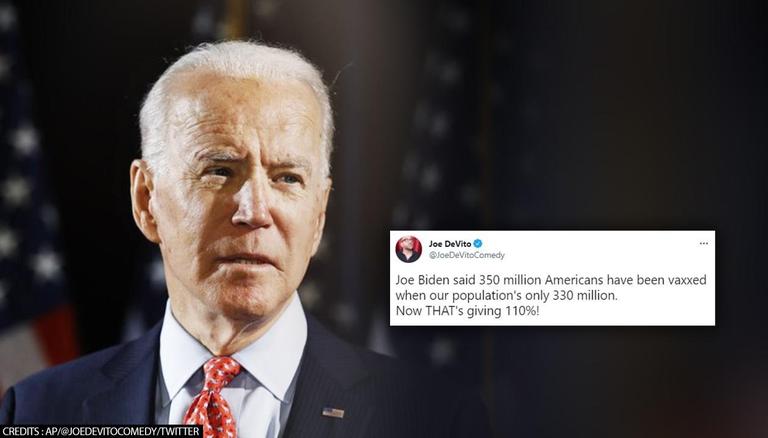 
US President Joe Biden on August 6 made a numerical error during a speech, as he told listeners 350 million Americans had already been vaccinated despite the fact that there aren’t that many people living in the United States. According to the latest census, the entire population of the US is 331 million. Netizens were quick to point out the factual error made by the president and even noted that Biden made the mistake after looking at his notes.

“This is a pandemic of the unvaccinated. So we have to get more people vaccinated,” he said. Biden then paused briefly to check his notes and then added, “Well over – what’s the number again, I’ll remind myself – 350 million Americans have already been vaccinated. They’re doing fine”.

What a joke of a president. He said we have 350 million people vaccinated, that’s more than the entire U.S. population, we have currently about 328 million people in the U.S. 🤦🏾‍♂️. #biden #vaccinated #350million #BorderCrisis pic.twitter.com/ejLMCYrSAT

It is possible that Biden had mistakenly referred to the number of vaccine doses administered in the US, which is almost 350 million. The actual number of fully vaccinated Americans is 166 million - approximately half the population. Following Biden’s address, Twitteratis were quick to poke fun at the factual error and even called him a “joke”.

Joe Biden said 350 million Americans have been vaxxed when our population's only 330 million.
Now THAT's giving 110%!

“350 million Americans have been vaccinated” - Joe Biden (Not even that many citizens in the USA) What did we do bringing this joke in…….

Someone tell this old fool the population of USA. 🤦‍♂️ pic.twitter.com/ouTpC5fv86

According to Biden 350 million Americans have been vaccinated. Problem is the U.S population is less than 335 million.

Meanwhile, this is not the first time that Biden an error. The president has even referred to himself in the past as “a gaffe machine”. In a recent incident, Biden forgot the South African President’s name and had to be reminded by UK PM Boris Johnson. In another, he accidentally referred to Syria as Libya. He even confused former presidents Donald Trump and Barack Obama in a speech to Mack Trucks assembly plant in Pennsylvania’s Lehigh Valley. He caught his own error, saying it had been a Freudian slip.

Biden had said, “Back in 2009, during the so-called Great Recession, the president asked me to be in charge of managing that piece, then-President Trump. Excuse me, Freudian slip, that was the last president. He caused the ... anyway, President Obama when I was vice president”.