Watch: Biden Seeks Wife's Help After Struggling To Get Hold Of Jacket, Later Drops Aviators Too

US President Joe Biden once again the caught camera's attention when he struggled to put his jacket standing on the tarmac. Watch video here: 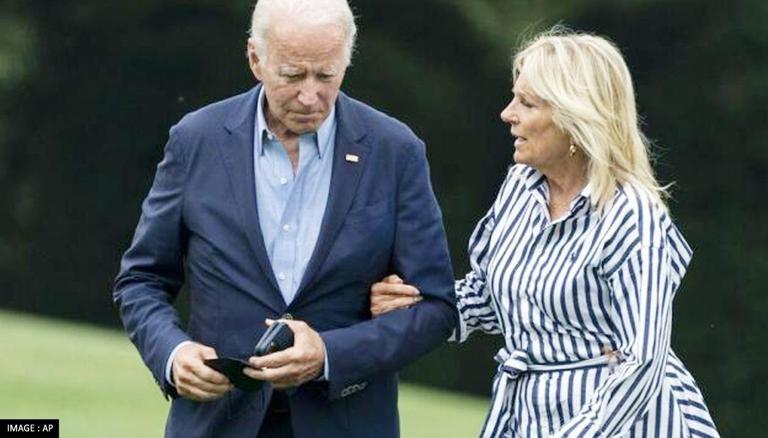 
US President Joe Biden once again caught the camera's attention when he struggled to put his jacket standing on the tarmac. In the process, he dropped his signature aviator sunglasses that balanced precariously on his nose for quite a while. Unable to put his sleeve into the navy blue coat, Biden then sought First Lady of the US and wife Jill Biden's help to get hold of the sleeve that was swaying in the wind blown by Marine One helicopter's blade on the tarmac.

The awkward moment of the 79-year-old was caught on camera as they were about to board Air Force One from Lexington after a visual survey of the flood-hit areas in Kentucky. Vision limited by the mask and sunglasses, Biden made repeated attempts to grab the flying sleeve, in vain. At last, he turned to his wife Jill, who stood right beside him in a white and grey satin dress. With a smile on her face, Jill pulled on the unruly blazer and helped her husband put it on. Moments later, as the couple walked towards the Presidential Airbus, Biden's trademark glasses dropped as he tried to adjust the jacket. Biden stooped over and picked up his favorite pair while his wife strolled on the tarmac.

Notably, the US President's awkward video was snapped during his first official trip outside Washington since he tested positive for COVID-19 twice earlier this month. He was under self-isolation for nearly two weeks. The Bidens on Sunday took their first trip since the health anomaly to meet with flood victims in Kentucky.

It is pertinent to mention that in July Kentucky was struck by the worst flood in the history of the state. Destructive flash-flooding impacted hundreds with innumerable homes washed off in gushing water. About 38 people were killed in the eastern part of the state which received 8-10.5 inches of rain in a span of 48 hours. Biden has pledged federal assistance to rebuild homes in the disaster-stricken regions, further noting that the incident was "another sign of dangerous climate change."