Biden Tells US Troops In Poland They Are ‘going To Be In Ukraine’, White House Responds

“The president has been clear we are not sending US troops to Ukraine and there is no change in that position,” a Biden spokesman clarified later. 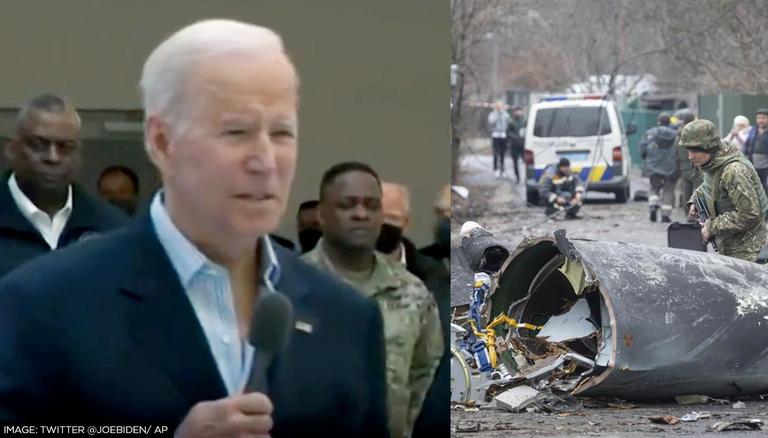 
During his visit with the United States 82nd Airborne Division stationed in Rzeszow, Poland to survey the firsthand humanitarian efforts assisting Ukrainian refugees, US President Joe Biden appeared to make a speech blunder. During his major address, the President of the United States told the troops in Poland not far from the Ukrainian border, that they will gauge the war devastation and atrocities on the Ukrainians wreaked by the Russian forces once they “get there”.

“You will see when you get there, and some of you have already been there. You will see women, young people standing in front of the damned tank,” Biden told his troops before travelling to Warsaw, prompting disconcerted glances among the soldiers.

My message to the 82nd Airborne Division on the ground in Poland: Every single one of you stepped up. Thank you. pic.twitter.com/9Z9NeiWllQ

Watch live as I receive a briefing on the humanitarian response to ease the suffering of civilians inside Ukraine and to respond to the growing flow of refugees fleeing Putin’s war of choice. https://t.co/8utsgGNwWt

This afternoon, I met with members of the 82nd Airborne Division on the ground in Poland. These folks are serving alongside our Polish Allies to bolster NATO’s frontline defenses. They’re doing incredible work and I’m grateful for their service. pic.twitter.com/mXu50UuRWI

Biden’s “when you’re there” remark also flared speculations about the United States troop deployment on Ukrainian soil, later doubled down by the White House. Washington had earlier made clear that it must not involve directly in combat with Russian forces to avoid triggering “World War III” or declare a no-fly zone.

As Biden addressed scores of paratroopers seated at a mess hall in Rzeszow, southeastern Poland after sharing a pizza and selfies, he said to United States forces, “You’re going to see [destruction] when you’re there [in Ukraine]. He then also continued making another bizarre claim: “Some of you [soldiers] have already been there, you’re gonna see.” He then added, that America was working to “keep the massacre from continuing” despite that the US has been rampantly supplying arms and other weaponry cumulated from allies to Ukraine’s military.

Pentagon, though, stopped the Biden administration from considering Poland’s proposal of supplying 28 Soviet-designed fighter jets to Ukraine to counter the Russian threat, citing that its intel states a full-blown war could break out directly with adversary Moscow’s forces.

On Friday, the White House scrambled to rectify Biden’s speech quickly announcing that Washington, under no circumstances, would deploy the US military in Ukraine.

“The president has been clear we are not sending US troops to Ukraine and there is no change in that position,” a Biden spokesman further clarified in a remark made to American broadcaster, The Post.

Biden had also earlier made such speech slurs earlier during an estimated 19-minute conference in Belgium. Biden, accusing Russia of war crimes, asserted that the US’ response to Russian troops using chemical weapons “would depend on the nature of the use” turning heads. It appeared as though the US leader had, to some extent, given Russians a green light to deploy the hazardous chemical weapons in course of the war “in some way.” He had also appeared to state that Washington will retaliate “in the same kind.”

White House national security adviser Jake Sullivan had then clarified to the reporters that Biden did not, in any way, meant using chemical weapons against Russia or an escalation of such warfare. “The United States has no intention of using chemical weapons, period, under any circumstance,” Sullivan reportedly said.

Biden had also mistakenly labelled the Ukrainians as “Iranian people” during his first State of the Union address, prompting his Vice President Kamala Harris to act as a speech corrector from her seating behind. “Putin may circle Kyiv with tanks, but he will never gain the hearts and souls of the Iranian people,” Biden said. “He will never extinguish their love of freedom. He will never weaken the resolve of the free world.” The awkward moment sparked memes and jabber on Twitter from the Iranians as Americans also expressed deride that Harris had to be mouthing “Ukrainian” for an embarrassing slip-up.

WE RECOMMEND
Jill Biden was upset about US President Joe Biden choosing Kamala Harris as VP: Report
Joe Biden hails US 82nd Airborne Division in Poland; 'grateful for their service'
Amid Russia-Ukraine war, Joe Biden to conclude 4-day Europe trip with 'message of unity'
Russia accuses US President Joe Biden's son of financing military-bio research in Ukraine
Biden claims US 'only country' based on Idea of Equality; 'Rest of the World looks to us'