Fiddleheads Cafe has put up a sign announcing the fee for customers who wear masks while ordering and an extra $5 from those boasting about being vaccinated. 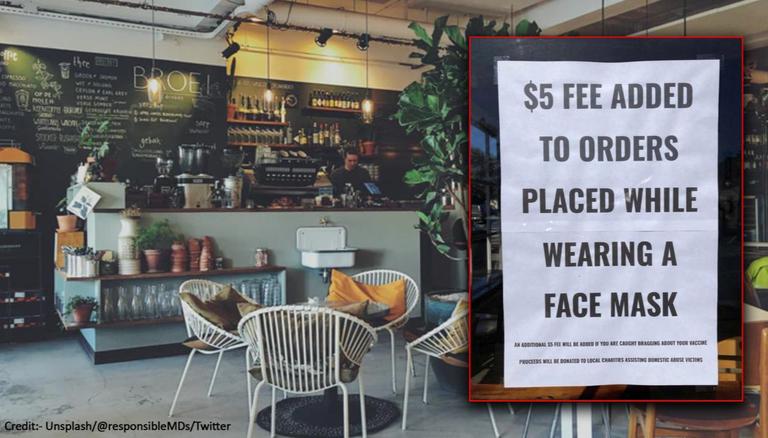 Customers have to pay extra $5

Signs posted on the window and at the register of Fiddleheads Cafe reads, "$5 FEE ADDED TO ORDERS PLACED WHILE WEARING A FACE MASK." And in the fine print below that message, it adds that "an additional $5 will be added if you are caught bragging about your vaccine." Chris Castleman, owner of the cafe told NBC News that some customers have paid the $5 fee while others have expressed shock and outrage. He added that the "fee" is an optional donation as the amount goes to charities assisting domestic abuse victims. He further said that some people refuse to pay the extra amount and others have gladly paid it.

Hey #medtwitter, leave Fiddleheads Cafe in Mendocino, CA a review on Google and Yelp and tell them what you think. pic.twitter.com/8qkYTtILhM

Castleman said that the amount received from the donation will go to Project Sanctuary, a local domestic abuse organization, for two weeks before a new nonprofit enters the rotation. The customers are not forced to pay the amount but they have been given the choice. He said that he does not believe in mask-wearing, Adding that the customers of the restaurant have been supportive of their beliefs. The latest sign should not come as surprise as the restaurant had put a sign about masks in April as well. The sign posted at that time read, throw your mask in dustbin and receive 50 per cent off on your order. Castleman in 2020 temporarily closed the cafe after Mendocino County officials warned that masks were not optional at restaurants.

WE RECOMMEND
French President Emmanuel Macron enjoys coffee with PM Castex at Paris cafe: Watch
Fireworks damage Amsterdam cafe frequented by Ajax fans
'Mask mandatory for children above 2 years outside home': Odisha govt amid COVID crisis
Some aren't ready to give up masks despite new CDC guidance
FRIENDS special: Did you know FRIENDS had an Indian version that aired in 1999?