To counter the threat of close-in reconnaissance by foreign aircraft, China rushed the intensive training programme of the junior pilots. 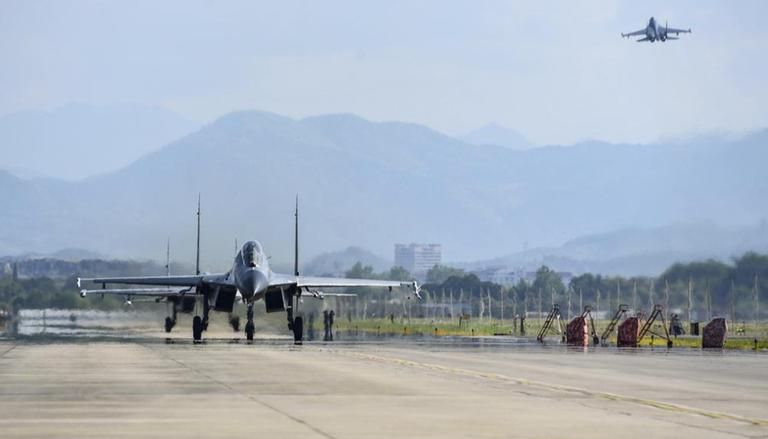 
China has deployed rookie fighter pilots fresh out of training college on combat-ready patrol missions along the country’s southeast coast amid an increase in close-in spying sorties by foreign planes. The Chinese Air Force, in order to confront foreign jets likely carrying out reconnaissance in the vicinity of Chinese airspace has sent junior fighter pilots on patrols in the East and South China seas as little as a month after they completed fighter pilot training, Chinese state broadcaster CCTV reported on Saturday.

According to Chinese military experts, most of the foreign aircraft were warplanes from the US. Meanwhile, China’s People’s Liberation Army (PLA) is engaged in the acceleration of battlefield training for the freshly commissioned pilots to cope with the incursions, SCMP reported.

As per the CCTV report, the majority of the PLA Air Force’s graduates completed a training course to become fighter pilots. However, in attempts to counter the threat of close-in reconnaissance by foreign aircraft, China rushed the intensive training programme pushing junior pilots to master the skills of aerial confrontation and countermeasures within a short duration of time.

A J-16 fighter-bomber pilot, the 24-year-old Song Zihao told CCTV that he was ordered into frontline action, having just completed the postgraduate training one month prior.

“It was my first combat task, which required me to immediately transition from a training situation to a combat-ready air patrol,” the Chinese pilot said, stating that he received the order because his fighter was the closest to the scene.

Another J-16 pilot told CCTV that the PLA pilots employ various countermeasures to stop the intrusions and evade rival jets. Such manoeuvre includes turning off all onboard electronic equipment to hide from the enemy’s tracking systems and making a full axial rotation to get behind the rival aircraft.

A researcher from the Beijing-based Yuan Wang think tank on military science and technology, Zhou Chenming state that the activity of close-in spying flights by American warplanes increased in the East China Sea and the Yellow Sea in early December.

“The sustained increase in the number of close-in reconnaissance missions made by the American aircraft has pushed the PLA to produce more pilots capable of dealing with provocative moves made by the US,” Zhou was quoted by SCMP as saying.

The Chinese researcher further revealed that even though junior pilots from the PLA Air Force are being “forced to take missions that are entirely beyond their capacities,” they are restrained from making aggressive manoeuvres “Because China doesn’t want the confrontation to turn into a military conflict.” Furthermore, Pilots from other areas in the country are also being drafted to take part in missions elsewhere, the CCTV report stated.

The development comes after the United States in 2022, sent large aircraft on up to 680 sorties to conduct close-in reconnaissance flights in the South China Sea, the SCMP reported. Moreover, 68 such sorties occurred in December alone, another Chinese think-tank the South China Sea Strategic Situation Probing Initiative states.