Coronavirus Pandemic Has Caused More Casualties In US Than Vietnam War

One of the deadliest periods for the US, the Vietnam war of 1968 witnessed over 16,899 deaths that year, which occurred at about half the pandemic rate.

With a death toll that reached 59,266, as of April 29 and over 1,035,765 infected with the coronavirus disease, the US has witnessed more fatalities than it had in the Vietnam war, over two decades ago, according to reports. At about 17.6 deaths per 100,000 inhabitants, lives lost to the pandemic are roughly higher than the US death toll in that war during 1968.

One of the deadliest periods for the US, the Vietnam war witnessed over 16,899 deaths that year, which occurred at about half the pandemic rate, as per the reports. At least 8.5 troops were killed for every 100,000 US residents which, is still the lower figures quoted than the lives that succumbed to the pandemic.

Besides, the coronavirus outbreak has gripped the country with challenging times, for instance, when the death toll surpassed 2,000 for six consecutive days in the month. Reports suggest, that the highest daily toll in the Vietnam War was recorded at near about 246 when military personnel had died due to the Test Offensive launched on a single day, January 31, in the year 1968, according to US media reports. 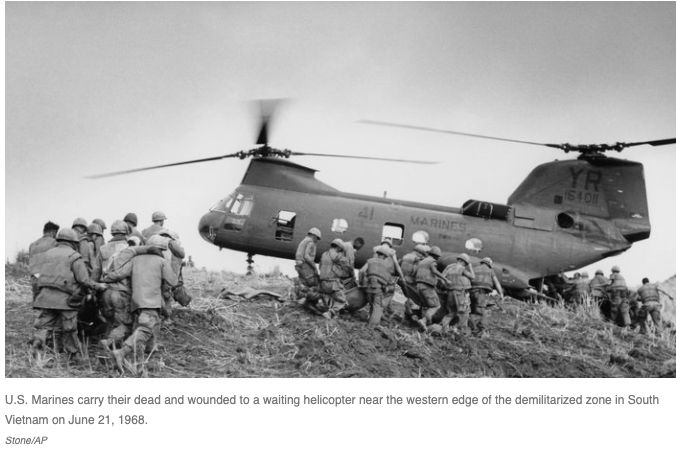 Read: US: Coronavirus Cases Cross 1 Million As Many States Plan To Reopen 'quickly'

In noticeable pandemic-war contrast, the presidents who had held office at the White House during the 60s, Dwight Eisenhower to Gerald Ford, had not addressed the general American people frequently, US news reports confirmed. However, President Donald Trump held the COVID-19 press briefing responding to the difficult questions and asking the health experts to give out the tally in the national address.

In totality, in the nine-year conflict, the US reportedly lost as many as 612,000 civilians and 1.26 million soldiers, but the pandemic outpaced the casualties and the costs for the US to contain the crisis. Olivia Nuzzi, an acclaimed media outlet observer in Washington stated that if over the course of six weeks, more American lives were lost to the novel coronavirus pandemic, it would raise serious speculations about the containment efforts by the administration. Also, the deaths would have dangerously superseded the toll mark any war the US in its entirety may have witnessed. Health experts in the US have reportedly suspected that the original deaths projections without social distancing measures might hit 2.2 million, according to reports.

Read: Study Suggests Traces Of Coronavirus Can Linger In The Air