Former US President Donald Trump expressed his condolences to the families of US service members killed in an explosion at Kabul airport in Afghanistan. 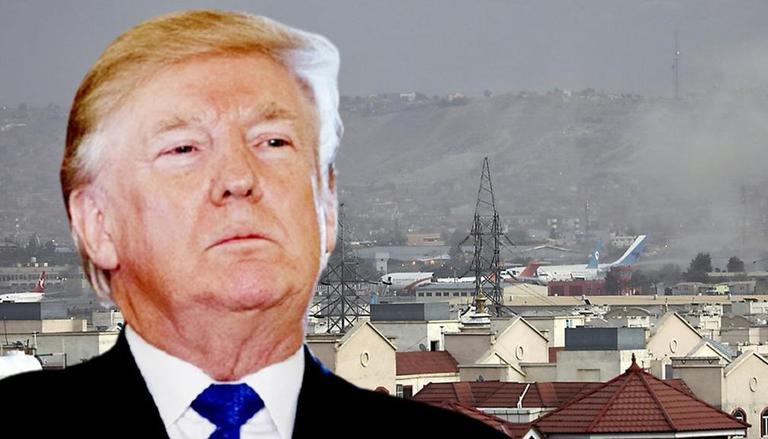 
Former US President Donald Trump, on Thursday, expressed his condolences to the family members of US personnel who lost their lives in a terrorist attack at the Kabul airport on 26 August.

"Melania and I send our deepest condolences to the families of our brilliant Service Members whose duty to the USA meant so much to them," Trump, adding, "Our thoughts are also with the families of the innocent civilians who died today in the savage Kabul attack." The former US president also said in a statement that the incident should never have been allowed to happen.

"This tragedy should have never been allowed to happen, which makes our grief even deeper and more difficult to understand," he continued, "May God bless the U.S.A.".

On Wednesday, Trump had slammed his successor President Joe Biden on his Afghan policy. Trump said, “Biden surrendered Afghanistan to terrorists and left thousands of Americans for dead by pulling out the military before our citizens”. He added, “Now we are learning that out of the 26,000 people who have been evacuated, only 4,000 are Americans. You can be sure, the Taliban, who are now in complete control, didn’t allow the best and brightest to board these evacuation flights."

“Instead, we can only imagine how many thousands of terrorists have been airlifted out of Afghanistan and into neighbourhoods around the world. What a terrible failure. NO VETTING. How many terrorists will Joe Biden bring to America? We don’t know! (sic)” the former US president said in his statement.

Trump's role in the Aghan crisis

When Trump took charge as US president in 2017, there were just under 10,000 US military troops in Afghanistan. On being asked what his strategy for the withdrawal of troops would be since al-Qaeda head Osama Bin Laden had been successfully killed by US troops in Pakistan, Trump had asserted that conditions on the ground would dictate any decision-making.

In the next few years, Afghanistan witnessed several terror strikes orchestrated by the Taliban. However, in February 2020, a deal was negotiated that set the tone for a full American military and NATO evacuation in exchange for the Taliban promising to cut tall ties with terror groups, including al-Qaeda. This came to be known as the Doha Agreement, after the Qatari capital where it was signed. The initial deadline for withdrawing all US forces was set for May 2021.

READ | IS says it targeted US troops in Kabul, Afghans

Doha Agreement and release of prisoners

The Agreement for Bringing Peace to Afghanistan, as it was formally called, had not included the Afghan government in talks in Doha causing some friction between the USA and former Afghan president Ashraf Ghani. The Trump administration also influenced the Afghan government to release 5,000 Taliban prisoners, including 400 criminals convicted of serious crimes like murder.

The move was made with the aim of having better diplomatic relations with the Taliban. In a similar move, when the Taliban took over the Afghan government this month, they released a number of prisoners. As per reports, some of them were affiliated with ISIS.

READ | Joe Biden vows retaliation over Kabul blasts, says 'we will hunt you down & make you pay'

Leaders across the world severely condemned the terrorist attack on Kabul's Hamid Karzai International Airport on 26 August. Among them, US President Joe Biden said that he is considering strikes against Islamic State Khorasan (ISIS-K) assets.

READ | US flag to fly at half-mast until Aug 30 to honour troops, victims killed in Kabul attack

Watch as I deliver remarks on the terror attack at Hamid Karzai International Airport, and the U.S. service members and Afghan victims killed and wounded. https://t.co/NBv02m3Bpm

Meanwhile, US Secretary of State Antony Blinken spoke with UK Foreign Secretary Dominic Raab. Both sides agreed that close counter-terrorism cooperation should be maintained. They also addressed the formation of a coordinated international response to Afghanistan's situation.

At Baran Camp near Kabul Airport, an Islamist militant suicide bomber managed to reach a huge gathering of translators and collaborators with the American troops and detonated his explosive belt among them. According to reports, the attack killed 72 individuals and injured over143 people, including Taliban combatants.

According to the ISIS-K statement, the bomber evaded US security procedures and targeted a camp where US forces were gathering paperwork for those who had cooperated with the military. There was no mention of a second suicide bomber or gunman in the statement.