Donald Trump gets booed for advocating COVID-19 vaccine at the 'Save America' rally in Alabama, he said the vaccine is good and I recommend everyone to take it. 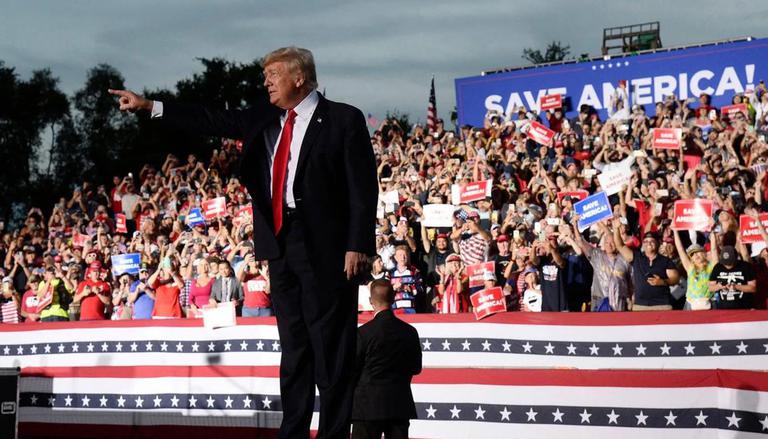 
At the 'Save America' rally, former US President Donald Trump addressed a crowd of thousands in Cullman, Alabama. Here, he spoke about about several issues such as immigration, Joe Biden-led-government, and COVID-19, which he still calls the "China virus". During his address, Trump advocated the COVID-19 vaccine and urged everyone present at the rally to get vaccinated. However, Trump in return got 'booed' by the audience present. As Trump spoke about inoculation and the benefits of the vaccine, a large group of maskless Alabamans who were present at the rally loudly mocked him.

The event began with an introductory speech by George C. Scott's famous "Patton" speech, after which Trump addressed the crowd of thousands, where he said that he had already taken COVID shots and recommended everyone take it, to which the crowd replied with jeers. In response, Trump quickly covered up and said, "And you know what? I believe totally in your freedom. I do. You’ve got to do what you have to do, "Trump said. But, I recommend taking the vaccines. I did it. It’s good. Take the vaccines, " said Trump at his "Save America" rally.

It is pertinent to mention that COVID-19 cases in Cullman County are extremely high, and the hospitals in Cullman are overwhelmed with patients, and the last two weeks have been very crucial for the people. It must be noted that Trump's mega-rally was hosted in the heart of the city, where the vaccination rate is marginally is very low compared to the rest of the US. On Thursday, the city declared a COVID emergency to get extra healthcare support for conducting the rally.

Trump has often promoted the COVID-19 vaccine but has openly discarded the upcoming booster shots recommended by the Biden administration. In an interaction with a media person, Trump claimed that the booster jabs introduced by the Bidden government are a "money-making operation for the Pfizer company". Notably, despite all the tussle, the US so far has administered 263 million doses of vaccine, and the daily average of vaccinations stands at 889,158 doses per day.

READ | Donald Trump says Taliban has been 'fighting for a 1000 years', calls them 'good fighters'

WE RECOMMEND
Donald Trump slams Biden over US' hasty Afghan withdrawal: 'You had to just follow a plan'
Donald Trump's 'Bomb the bases' evacuation strategy from Afghanistan baffles netizens
Donald Trump calls Afghanistan situation 'biggest embarrassment' after Taliban siege
Donald Trump says Taliban has been 'fighting for a 1000 years', calls them 'good fighters'
Donald Trump weighs in on Afghanistan: 'If I was President, things would be different'