A Florida's boy gesture of kindness for Hurricane relief has earned him a VIP trip to Disney World. Disney released a video of their team surprising the boy.

There is a saying that generosity goes unrewarded but that proved to be life-changing in a big way for a Florida boy named Jermaine Bell, who was saving money for a birthday trip to Walt Disney World Resort, but at the last moment decided to empty his money box to feed people impacted by Hurricane Dorian. It was then that Disney took notice of this sweet gesture and awarded him with a VIP trip by going to the boy's home and inviting him. Disney rewarded Jermaine Bell and his family with a free trip to the Disney World. The gesture has enthralled netizens who showered praise on the little boy.

According to reports, Jermane instead of going to Disney world asked his parents to South Carolina on Labour Day weekend as he wanted to use his holiday money to help people impacted by Hurricane Dorian. In a statement, Bell said that people who are travelling to go to other places he wanted them to have some food to eat, so they can enjoy the ride to the place that they're going to stay at."

According to reports, Disney officials took notice of Jermaine's kind act and decided to reward his gesture of by giving him a free trip to the fantasy park in Lake Buena Vista, Florida. A group of cast members then visited his house in Jacksonville,  Florida where they informed him that he along with his family are being rewarded with a free all-expense paid VIP trip to Disney World in Florida.

Netizens are in awe of Jermaine

A video of Jermaine's visit has been released by Disney park's official YouTube channel titled 'Six-year-old Jermaine Bell surprised with a Dream Disney World Trip'. With over 200,000 hits and hundreds of comments the video had become a huge hit on the video streaming platform. Netizens meanwhile are in awe of the gesture and are showering praise on the boy commenting on his upbringing and urging Disney to gift him a Cinderella suite. A user commented "You all best be putting that boy up in cinderella castle." "The fact that he replied with “Yes ma’am” when answering the door shows his parents have done a great job raising him," said another.  "Put that baby in the Cinderella Castle Suite!." 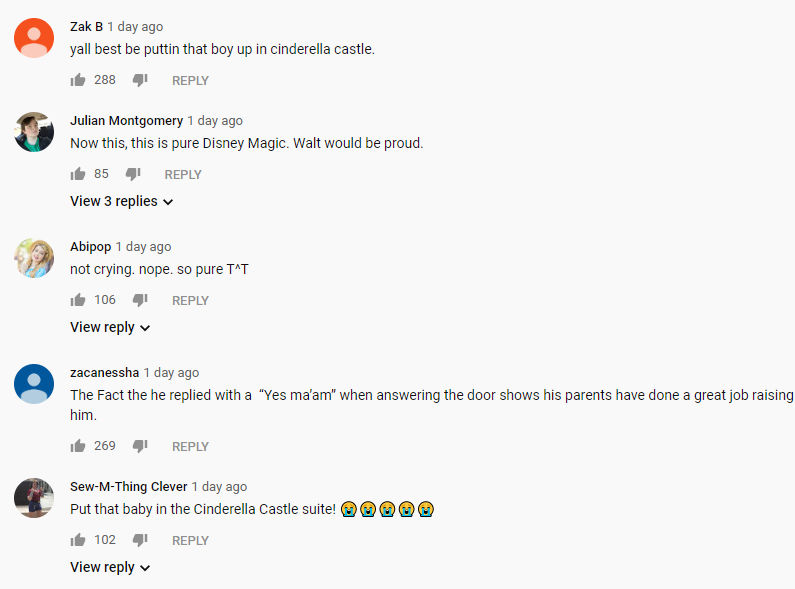