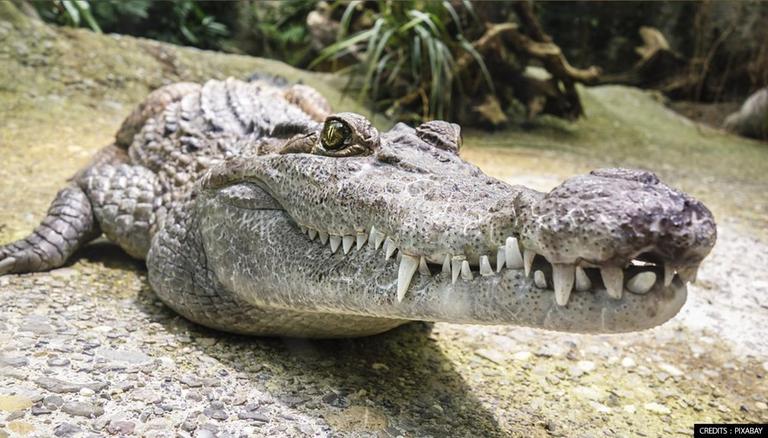 
A diver in Florida survived a dangerous alligator bite as he was searching for prehistoric shark teeth in state's Myakka River last week. Currently, Jeffrey Heim is suffering from a skull fracture in the attack that happened in Sarasota County. He was operated with 34 staples to close the wound. The alligator bite also left puncture wounds on his hand. The 25-year-old Tampa man mistook the alligator as a boat propeller until he realised the danger.

Heim told CNN that he had dived in the river several times before and had entered the water at a public spot near a restaurant. However, this time also he did not notice any danger when he took 10 minutes of time to look for gators while putting on his wetsuit. With hopes of finding Megalodon teeth in the gravel at the bottom of the river, he free-dived, without scuba tanks and took a few deep breaths. Nearly 45 seconds later the alligator stuck.

Heim explained that the alligator lunged at him, but he tried to go back away and climb back onto the river bank. An ex-firefighter at the restaurant got a first aid kit and bandaged his head while others called 911. Expressing his state of mind, Heim said that he felt lucky that he was in a public place and had people around. The survivor also considered himself lucky as he could come out alive. Currently recovering, Heim spent a day-and-a-half in the hospital and said that his swelling has gone down a lot. He is still taking antibiotics to fight off infection.

The Florida Fish and Wildlife Conservation Commission (FWC) explained that alligators become more active as their courtship activities begin in April, with warmed-up temperature. Officials informed that an alligator, a 6-foot-4-inch female, was removed from the area and the trapper is working to remove another alligator in the vicinity. Despite the intensity of the accident, Heim hoped that the alligator was not killed. He blamed the attack on mistaken identity. Heim has also decided to keep diving once he's well enough, but he'll stay away from the Myakka River.