A Hindu priest has been attacked near New York temple in New York City in the United States. The attacker has been arrested by the police and they are probing whether the incident was a hate crime or if there was any other motive.

A Hindu priest has been attacked near New York temple in New York City in the United States on July 18, say reports. The attacker has been arrested by the police and they are probing whether the incident was a hate crime or if there was any other motive, the reports added.

As per reports, the priest, Swami Harish Chander Puri, was brutally attacked near the Shiv Shakti Peeth in Glen Oaks at 11.00 am on Thursday. The attacker allegedly came from behind as Puri, clothed in his religious garb, was walking down the street. The attacker hit him repeatedly after sneaking behind him. Puri was rushed to the hospital soon after the attack. The attacker allegedly yelled “this is my neighbourhood” during the incident, the reports added.

An NYPD spokesperson said the victim was taken to a hospital after being punched and hit with an object believed to be an umbrella. The victim suffered cuts to his head, nose, chest, arms and legs, the spokesperson said. As per reports, the attacker has been identified as Sergio Gouveia. The police have booked him with charges related to assault, harassment and criminal possession of a weapon.

"I commend the NYPD for making a swift arrest in this case and I'm confident that justice will be served. I stand with the Hindu community and wish the victim a full recovery," Rep. Grace Meng, D-New York, said in a statement. Read the full statement below:

The Hindu community has expressed concerns over the attack. A worshipper said to the media that the priest's garb made him stand out, while other said the community is worried about what is happening in their neighbourhood. The priest is on his way to making a full recovery and has said that he will be praying that for the attacker.

A Facebook group called 'Sadhana: Coalition of Progressive Hindus' posted informing the people about the incident. With a message of peace, the post attributed the incident to President Trump's veiled racist attack on Congresswomen who are people of colour and immigrants. It said, "When the US President targets immigrants and refugees and encourages chants of "send her back" at rallies, this results in real harm inflicted on our communities... May justice be served, and may love prevail over this hate we are seeing here and all over the country. We all belong here! Om Shanti." 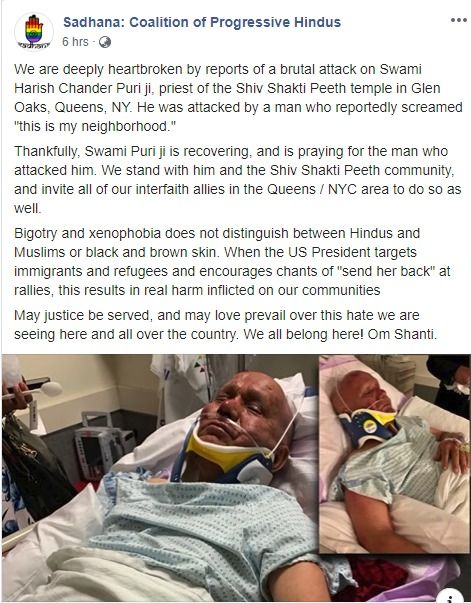 US President Donald Trump had called on the four Democratic congresswomen to “go back” to their “broken and crime-infested” countries in tweets that have been widely denounced as racist. His remarks were directed at Reps. Ilhan Omar of Minnesota, Alexandria Ocasio-Cortez of New York, Ayanna Pressley of Massachusetts and Rashida Tlaib of Michigan. All are American citizens, and three of the four were born in the U.S.