“Terrifying," a Floridian who chose not to evacuate, said of the raging hurricane as he stepped outside his home in Venice to witness the calamity. 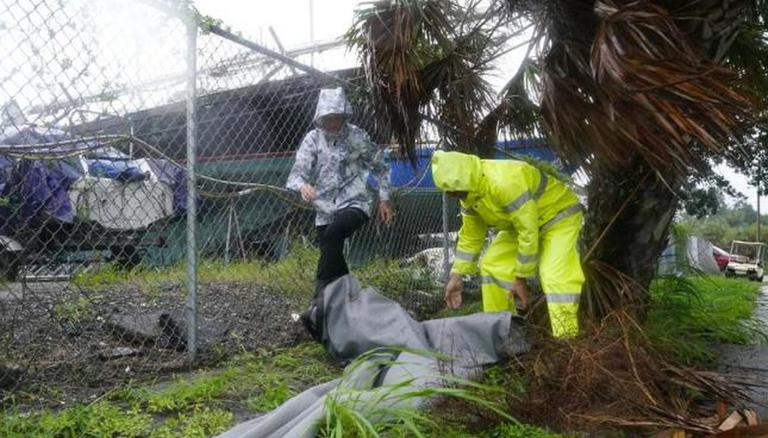 
On Thursday, the "extremely powerful" Hurricane Ian made landfall in southwest Florida flattening homes, uprooting trees and overturning vehicles along the coast near Cayo Costa, west of heavily populated Fort Myers. Ian rapidly intensified with the strength of an "extremely dangerous" category 5 storm with fast winds gusts of up to 155 mph. Hurricane Ian lashed heavy downpours across the state of Florida, as it inundated the roads and coastal areas with a historic surge of up to 18 feet. “Terrifying," a Floridian who chose not to evacuate, said of the raging hurricane as he stepped outside his home in Venice to witness the calamity.

The Sound and The Fury! Sound up.#HurricaneIan #Hurricane 🌀 #Florida pic.twitter.com/uTNh4IE3Kr

This camera is 6ft above the ground btw

To give people an idea of how horrible Hurricane Ian is in Bonita Springs and the second wall of the hurricane hasn’t hit yet. pic.twitter.com/PvpGuv9QYL

“I literally couldn’t stand against the wind,” Pritchett wrote in a text message to the Associated Press, describing the situation after the Ian made landfall. “Rain shooting like needles. My street is a river. Limbs and trees down. And the worst is yet to come," he stated.

Meanwhile, Air Force hurricane hunters explained that Hurricane Ian gained abominable strength over warm Gulf of Mexico water after tattering the island of Cuba and smashing the country's electricity grid, plunging the entire island into the dark. Ian was centred about 60 miles west-southwest of Naples when Florida Gov. Ron DeSantis warned that it is going to be "a nasty nasty day, two days." He reiterated that those who are in the path of the Hurricane must rush to the safest possible shelter, as it is expected to cause devastation never seen before in a long time.

READ | US: Millions are urged to evacuate as Hurricane Ian approaches Florida; airports to close

Florida has more than 42,000 linemen already staged for power restoration efforts across the state. Thank you for being prepared to power up our state.

Some 125 miles south of Tampa, Hurricane Ian slammed ashore, north of Fort Myers barrelling into Florida. It brought unimaginable 12 to 18 feet of water that covered a 100-mile stretch of coastline, and footage appeared to show that rarely seen marine creatures such as sharks had washed up with the storm. Hurricanes centre stretched from Bonita Beach north through Fort Myers and Charlotte Harbor to Englewood. Gov. Ron DeSantis declared a state of emergency across entire Florida., this was followed by governors of North Carolina and South Carolina.  More than 1 million were left without power in Florida, and there was an estimated 330,000 power outages, that may have impacted approximately 70% of the utility customers, according to the data put out by  PowerOutage.us.

To give people an idea of how horrible Hurricane Ian is in Bonita Springs and the second wall of the hurricane hasn’t hit yet. pic.twitter.com/PvpGuv9QYL

Video from my dad who (very unwisely 🙄) decided to stay in Ft. Myers to ride this thing out. This was a few hours ago, now cars are floating and banging up against the condo and water still constantly rising. Hate feeling helpless like this. #HurricaneIan pic.twitter.com/IaTTJIbqhW

Intense storm surge has caused boats and cars to float down streets. Storm surge is expected to go as high as 18 ft. pic.twitter.com/PwTifYeIQy

This is in Naples Park and the surge has entered into homes. #HurricaneIan pic.twitter.com/buIhr2jjtY