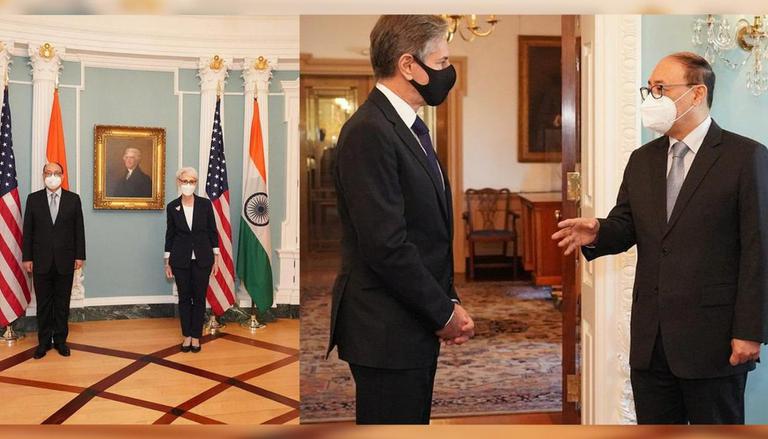 Arindam Bagchi wrote on Twitter that Indian Foreign Secretary Harsh V Shringla met US Deputy Secy of State Wendy Sherman for substantive discussions on advancing India-US Strategic Partnership across sectors including defense, trade & investment, and climate change. Bagchi also informed that they also reviewed developments in Afghanistan, the Indo-Pacific region, COVID pandemic and discussed cooperation in the UN and other regional and multilateral issues of mutual interest. As per the official release, they also considered the possibility of enhancing collaboration in areas of counterterrorism, HADR, and maritime security.

Earlier on Thursday, the Minister of External Affairs reiterated its stance and told the media that currently, India's priority lies in the evacuation of stranded Indians in the war-torn nation.

External Affairs Ministry Spokesperson Arindam Bagchi on the roadmap of further meetings with the Taliban said, "It's not a matter of yes and no. Our aim is that Afghanistan's land shouldn't be used for terror activity of any kind." adding that India is not aware of any detail on what kind of government could be formed in Afghanistan.

India and the United States held a bilateral 2+2 Inter-sessional meeting at the official level on 1 September 2021 in Washington DC. As per the official release, they reviewed the progress made since the last 2+2 Ministerial Dialogue in October 2020 and preparations for the forthcoming dialogue later this year.

As per the official release, both sides took stock of the progress and developments in the bilateral agenda under the India-US strategic partnership, including defence, global public health, economic and commercial cooperation, science and technology, clean energy and climate finance, and people to people ties. They explored opportunities for enhancing ongoing cooperation in these fields based on mutual interests. Cooperation in contemporary areas such as space, cyber security and emerging technologies was also discussed.