“We can’t be silent in the face of rising violence against Asian Americans,” Joe Biden wrote on Twitter Tuesday, adding, “These attacks are wrong." 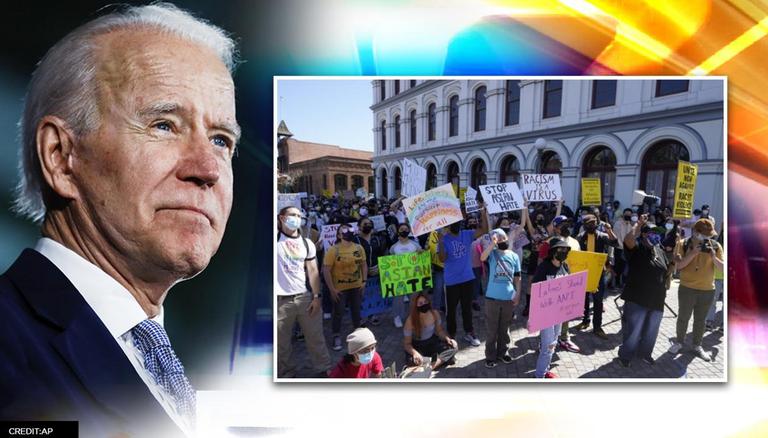 US President Joe Biden on Tuesday denounced the surge in violent crimes against the Asian American community saying these attacks are “wrong, un-American and must stop”. In response to the harassment and racial sentiments against the Asian and Pacific Islander American citizens, the US commander-in-chief took punitive actions including the appointment of a permanent director in the federal government to lead the coordination of measures to mitigate hate crimes. The announcement of new policies against anti-Asian bigotry on March 30 is based on Biden’s January Memorandum condemning and combating racism, Xenophobia, and Intolerance against Asian Americans and Pacific Islanders in the United States.

"Across our nation, an outpouring of grief and outrage continues at the horrific violence and xenophobia perpetrated against Asian American communities, especially Asian American women and girls," the White House said in a statement as it rolled out new directives for ending the anti-Asian bias. It added, that the new measures were in accordance with the US president’s commitment from January to eliminate racism, xenophobia, nativism, and other forms of intolerance and gender discrimination. "As President Biden said during his first prime time address, anti-Asian violence and xenophobia is wrong, it's un-American, and it must stop,” the White House stated.

“We can’t be silent in the face of rising violence against Asian Americans,” the president wrote on Twitter Tuesday, adding, “These attacks are wrong, un-American, and must stop.” 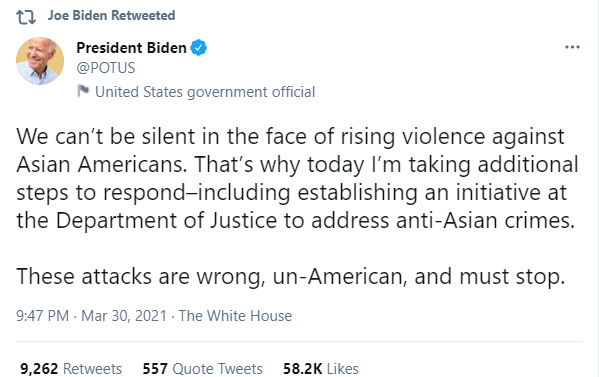 In the new policies, the US president upped the accessibility to hate crime data and mandated new training for the law enforcement officers, allocating nearly $50 million grants to support the victims as well as survivors of the hate crime. Funds were also channelled towards garnering resources to address challenges such as the language barrier. “This program will expand services to domestic violence survivors from Asian American, Native Hawaiian, and Pacific Islander communities,” the White House statement said.

The leader of the United States instructed The Justice Department to fast-track the persecution of the Anti-Asian hate crime accused and a crackdown on those that indulge in racial acts of violence. The Justice Department will publish a new hate crimes page with a focus on coverage of crimes directed against the Asian and Pacific Islander communities. The FBI meanwhile was asked to also hold civil rights and equality training to be able to better identify the discriminatory conduct against the people of colour and Americans of race.

Biden administration’s tough policies were enrolled in the aftermath of a spine-chilling incident that was caught on surveillance tape where a white man stomped on a 65-year-old elderly woman of Asian descent. Biden issued orders to the US Health and Human Services and Justice departments to develop ways to combat racist actions.