US President Joe Biden launched the Indo-Pacific Economic Framework (IPEF) in Tokyo setting the stage for deeper engagement in the fast-growing region. 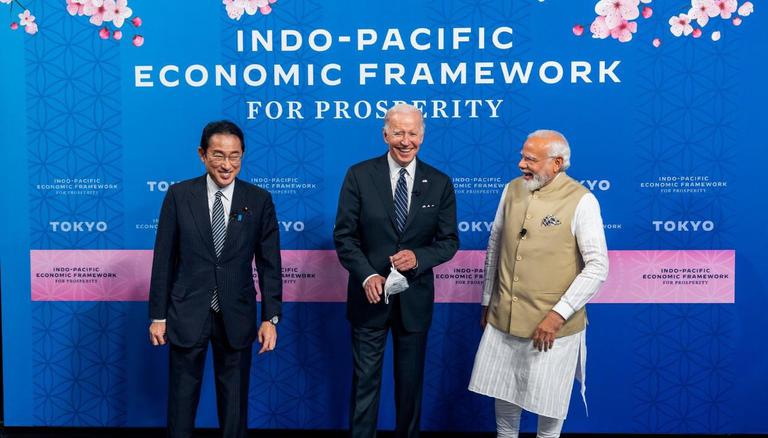 
US President Joe Biden on Monday launched the Indo-Pacific Economic Framework (IPEF) in Tokyo, setting the stage for deeper engagement in the fast-growing region of Indo-Pacific.

Addressing the launch event of IPEF in Tokyo's Izumi Garden Gallery, US President Joe Biden said, "Indo-Pacific covers half the world's population, over 60% of global GDP and nations represented here today and those who join this framework in future are signing up to work toward an economic vision that'll deliver for all our people."

Yesterday in Tokyo, we launched the Indo-Pacific Economic Framework for Prosperity to create a stronger, fairer, more resilient economy for families, workers, and businesses in the United States and in the Indo-Pacific region. pic.twitter.com/O3Q3vq30Pd

The future of the 21st century economy is going to be largely written in the Indo-Pacific. That’s why we launched the Indo-Pacific Economic Framework for Prosperity to help all of our countries’ economies grow faster and fairer. pic.twitter.com/Bihpfumlt1

#LIVE | Indo-Pacific covers half the world's population, over 60% of global GDP & nations represented here today & those who join this framework in future are signing up to work toward an economic vision that'll deliver for all our people: Joe Bidenhttps://t.co/tIMQe1Qfxy

An initiative by the United States President Joe Biden, the Indo-Pacific Economic Framework or IPEF has been promoted as a "21st-century economic arrangement" that will address prevailing challenges such as creating standards for the digital economy, guaranteeing secure supply chains, and assisting in big clean energy investments. Notably, this initiative by POTUS Biden is seen as a counter-measure to Chinese influence in the Indo-Pacific region. It is pertinent to mention here that along with the US, there are 12 other initial IPEF member countries including India, Japan, Australia, Brunei, Indonesia, the Republic of Korea, Malaysia, New Zealand, the Philippines, Singapore, Thailand, and Vietnam.

Notably, the White House, in its press briefing, also spoke about the IPEF and stated that the member countries of IPEF represent 40% of global GDP. "Together, this very diverse set of economies represent around 40 per cent of global GDP.  And the fact that we have such a range and a significant number of partner countries on the ground floor for the launch reflects the far-reaching ambition of the framework and also indicates that there’s deep interest across the region in it," a statement from a press release from White House read. "But, of course, as we’ve also indicated from the start, this is an open platform. So there are other countries that could conceivably join us as we move forward," the statement read.

"IPEF is a 21st-century economic arrangement designed to tackle 21st-century economic challenges, ranging from setting the rules of the road for the digital economy to ensuring secure and resilient supply chains, to helping make the kinds of major investments necessary in clean energy infrastructure and the clean energy transition, to raising standards for transparency, fair taxation, and anti-corruption," a statement from White House on IPEF read.