"There was a strong consensus" with NATO on Afghanistan. "We agreed on diplomatic, economic, and humanitarian commitment to Afghan people," Biden said. 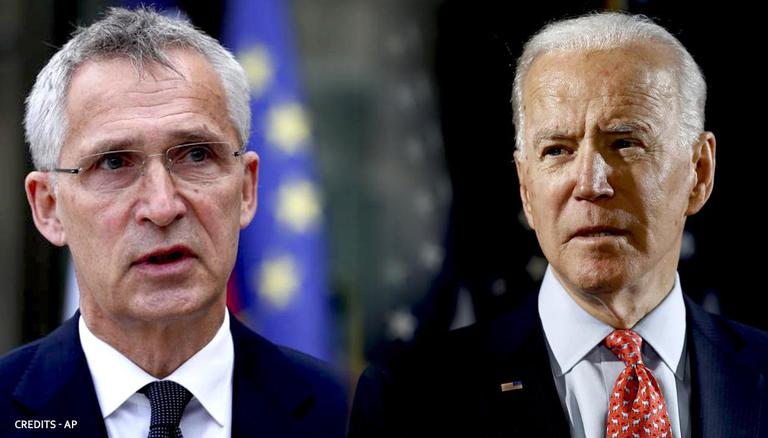 
US President Joe Biden on Monday said that there is a "strong consensus" among NATO leaders about the United States’ decision for complete troop withdrawal from Afghanistan. The NATO will continue to support the Afghan government and the security forces, Biden told a news conference following the NATO leaders' summit in Brussels on June 14. He furthermore said that the NATO treaty “is rock solid and unshakable” adding that “it a sacred commitment” after his meeting with the partners of the 30-member military alliance.

Tune in as I hold a press conference from NATO Headquarters in Brussels, Belgium. https://t.co/u8DQW3zwSF

Both US and NATO will be handing their Bagram Air Base to Afghan forces in about 20 days as troops are down drawn and US Central Command has completed 30-44 percent retrograde process, dispatching military equipment on C-17 globe master out of Afghanistan. US President Joe Biden has set a September 11 [the 9/11 anniversary of the terrorist attack on twin towers by Al-Qaida] deadline to pull out all 2,500 US troops and approximately 16,000 civilian contractors, ending the 20 long years of war after the US-led invasion of Afghanistan to fight the terror outfits.

The Foreign defense ministers of the North Atlantic Treaty Organization (NATO) will continue to provide the transitional functioning of Hamid Karzai International Airport and will work with Afghan forces to prevent the country from becoming “a safe haven for terrorists” after the US withdrawal, a NATO communique, separately stated. Despite the US forces withdrawal, NATO will continue to provide training and financial support to the Afghan National Defence and Security Forces, including through the Afghan National Army Trust Fund, the document issued Monday, read.

“There was a strong consensus among the leaders in that meeting on Afghanistan. Our troops are coming home, but we agreed that our diplomatic, economic, and humanitarian commitment to the Afghan people and our support for the Afghan National Defense and Security Forces will endure,” US President's said in his remarks at the NATO news conference.

'We will now open a new chapter,' says NATO chief

NATO chief Jens Stoltenberg meanwhile, stated the transatlantic alliance will train and assist the Afghan forces and will continue the funding to maintain "critical infrastructure”. NATO will ensure continued operation of an international airport in Kabul, Stoltenberg told a presser, following the meeting. Turkey of course plays a key role in those efforts," he stressed. Turkish President Recep Tayyip Erdogan told reporters at the end of the meetings with NATO leaders that his country would need “diplomatic, logistic and financial assistance” from the US to maintain troops in Afghanistan and protect Kabul’s international airport as NATO troops withdraw.

NATO in its communique reiterated that withdrawing the troops does not imply ending a relationship with Afghanistan. “We will now open a new chapter. We affirm our commitment to continue to stand with Afghanistan, its people, and its institutions in promoting security and upholding the hard-won gains of the last 20 years,” NATO reiterated.

"Ministers agreed that this continued support is the best way in which we can all contribute to peace efforts in Afghanistan. We are ending our military mission, but we are not ending our support to the Afghans. So today, defense ministers discussed the way forward. We will continue to provide funding to the Afghan security forces (and) provide advice and capacity-building support to Afghan security institutions,” the alliance's Secretary-General Jens Stoltenberg told a press conference in Brussels.

WE RECOMMEND
NATO Chief says China 'doesn't share our values', urges leaders to strengthen policy
UK PM Boris Johnson says no one at NATO wants to 'descend into a new Cold War with China'
NATO leaders declare China a global security challenge
NATO nations ready to jointly respond to attacks in space
US can rely on Turkey after Afghan troops pullout, says Erdogan ahead of meet with Biden