US President Joe Biden has once again triggered a storm on the internet. On Thursday, the POTUS was making an address from the White House. 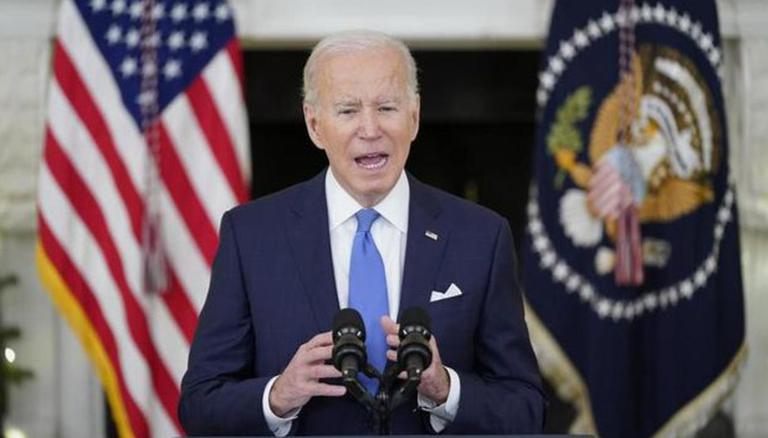 
US President Joe Biden has once again triggered a storm on the internet. On Thursday, POTUS was making an address from the White House when he failed to pronounce a certain word that, he said, described the United States of America. “America is a nation that can be defined in a single word, said Biden, but as he moved forward to say that word, he fumbled.

His gaffe quickly caught the attention of those present there and soon, a video of him fumbling started circulating on social media platforms. One netizen, who shared it on Twitter, captioned the clip as “Asufutimaehaehfutbw,” referring to what the US top ladder was heard saying. Watch the clip here;

America is a nation that can be defined in a single word:

The clip soon snowballed on Twitter, leaving Americans ridiculing their President for his faux pas. However, there were others, who sided with Biden and said that it was apathetic to make fun of him. "I don't see what the problem is here. America was founded on Asufutimaehaehfutbw," wrote a user. "making fun of stuttering? not cool dude," said another. Meanwhile, a third user quipped, "I can’t believe that out of 300000000 people there were only 2 candidates as Trump and Biden," referring to gaffes made by both Biden and his predecessors Donald Trump. Notably, there were many on the internet who questioned America's choice of president.

Why!? Are the young Americans non-competent or this was the only choice left for presidential candidate?

Nice to meet you.
I am Japanese.
I'm studying English.
English is still difficult to hear.
Can anyone tell me what the president said?😜😜😜

Someone's speech defect isn't funny. You have your flaws too. You're not perfect!

From 'Kleptocracy' to invisible handshake, Biden's faux passes in the past

Notably, this is not the first incident when Biden has been ridiculed by netizens. Earlier in April, the US leader fumbled while saying the word ‘Kleptocracy’ while addressing the US Congress. A video f the same was shared online by Tom Cotton, US Senator for Arkansas, who captioned it as “alarming”. More recently, the 79-year-old attracted mockery after getting into an 'invisible handshake' after concluding a speech at North Carolina Agricultural and Technical State University in Greensboro. Biden during his speech also made bizarre and non-relatable claims that he had served as a “full-time professor” at the University of Pennsylvania despite that he had never taught a class at the institute. Notably, his recent acts have also spurred concerns about his cognitive abilities and medical wellbeing online as he is the oldest ever American leader to serve in his position.

🇺🇸 US President Joe Biden got into an akward situation by trying to shake hands with 😅😂🤣??#JoeBiden #HandShake pic.twitter.com/ZTEPkHLAcJ