Since the eruption of the La Palma volcano, last month over 6,000 people was evacuated, reducing the number of casualties and damaging over 1,000 properties 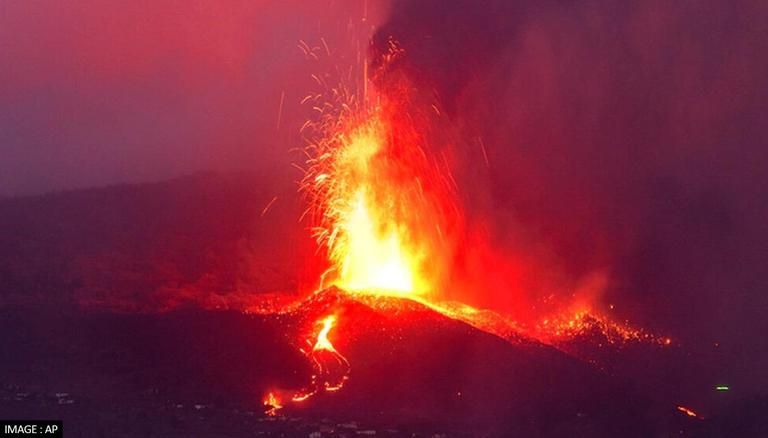 
A volcanic eruption in Spain’s Canary Islands of La Palma which has been erupting in the past two weeks has recently burst open two new cracks, pouring fresh molten lava into the sea. The authorities of the Canary Islands' emergency volcano response department have warned that this activity in the region is currently growing into “much more aggressive”. The fresh cracks, which are roughly 15 metres apart from each other, have poured streams of flaming red and orange molten rock down to the seawater in a path that runs parallel to the prior flow.

As per the Fox40 website, the technical head of the Canary Islands' emergency volcano response department, Miguel Angel Morcuende stated that nearly two weeks after the eruption on the island, these current cracks are considered to be "much more aggressive." Overnight, scientists discovered that eight additional earthquakes with magnitudes ranging from 3.5 to 4.0 had occurred. The Authorities reported that the outburst has been spewing gas and ashes up to 6,000 metres (almost 20,000 feet) into the atmosphere.

The recent developments of the La Palma volcano

More than 50 acres which are nearly 20 hectares of hardened lava have formed where molten rock is pouring into the sea. Presently, the authorities have been checking the quality of the air surrounding the beach area. The Sulphur dioxide concentration in the region has grown and the administration of La Palma has stated that it does not pose a health risk. Yet, on the other hand, the administration urged the local inhabitants to stay inside and to use face masks and eye protection to safeguard themselves from volcanic ashes.

As per the Portuguese Institute of the Sea and Atmosphere, fragments from the volcanic eruption have already touched the Azores, region of Portugal which is just 1,500 kilometres far, is creating a loss of visibility. The Portuguese agency further added that the components from the La Palma volcano eruption were carried to the Portuguese archipelago in the form of sulphate aerosols by gusty winds.

Since the eruption of the La Palma volcano, last month over 6,000 people have been evacuated, reducing the number of casualties. Scientists believe that this volcano has ejected 80 million cubic metres of molten rock which is considered to be more than double the volume ejected during the island's last eruption in 1971.

Over 1,000 properties which comprise houses and agricultural buildings, have been destroyed or damaged by the flowing lava, which has covered about 1,750 acres or 709 hectares of land area. La Palma has an estimated population of 85,000 people and a land area of little more than 700 square kilometres. There had been seven confirmed volcanic eruptions since the first one was recorded.