"Love, Your Sons": Dad Flooded With Birthday Messages After Sons Put Up Billboard

Many parents expect a call from their kids on their birthday, but one New Jersey dad is getting thousands of birthday wishes thanks to a prank from his sons.

Many parents expect a call from their kids on their birthday, but one New Jersey dad is getting thousands of birthday wishes thanks to a prank from his sons. At first, Chris Ferry’s two sons couldn’t decide what to get him for his 62nd birthday. Then one of them had an idea.

In a bid to make their dad’s birthday extra special, two sons of a New Jersey father pulled off something epic and got a billboard for him! With a message, “Wish my dad Happy Birthday” the siblings printed a huge photo of their father on the banner with his number urging people to wish the man and signed off “Love, Your Sons”. 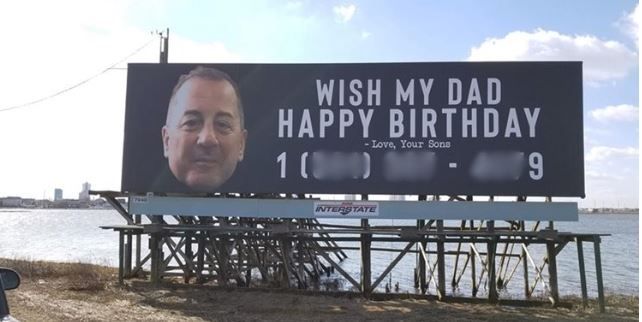 It was meant to be a prank, and their father was taken by surprise when he received thousands of calls and messages from people not only from their town but even people from overseas!

At first, Chris Ferry’s two sons couldn’t decide what to get him for his 62nd birthday. Then one of them had a quirky idea to make it special but also pulling his legs a little.

His son, also named Chris Ferry, had recently purchased a billboard outside Atlantic City for his addiction recovery centre, and he became inspired to get one for his dad as well.

As per foreign media, one of the sons said,“I called my brother (Michael) and said, ‘What if we put dad’s picture right on the billboard and say wish him a happy birthday?’ The prankster in me came out. My brother said he loved it — he was dying laughing".

So the siblings put up the giant billboard days before their father’s birthday on March 6, although there is no mention of the date on the banner. According to local news channel WPBF 25, things escalated quickly, when his sons shared an image of the billboard on Facebook. “I think I’ve had 15,000 calls, texts and Facebook hits in the last three days,” Ferry told the station. “I’ve received texts from all over the world, as far as the Philippines, Kenya, Luxembourg.”

The prank was a continuation of childhood stunts in which the boys would tell waiters and waitresses that it was their father’s birthday, the younger Chris Ferry wrote on Facebook.

“It was always the greatest for us to see the expression on his face when they came out with a lighted birthday cake and singing happy birthday in front of all the other hockey dads. This year we wanted to make his birthday super special and give him a little extra attention. Let’s make his cell phone light up! Happy Birthday, Dad! Love, your sons ❤️” 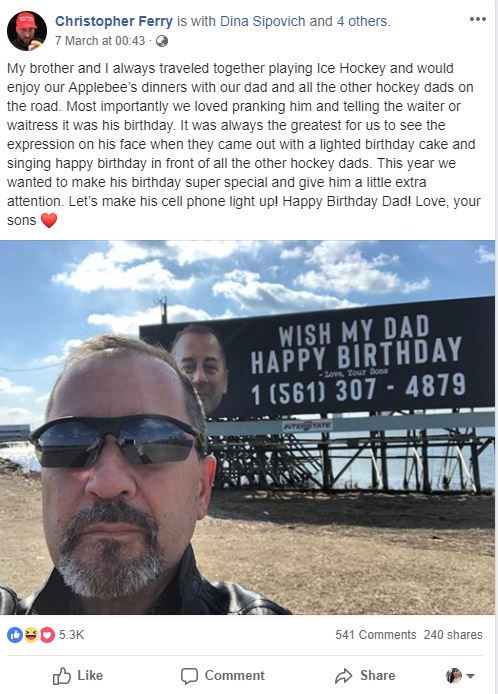