The National Guard went door to door in parts of Buffalo on Wednesday to check on people who lost power during the area's deadliest winter storm in decades, and authorities faced the tragic possibility of finding more victims amid melting snow. 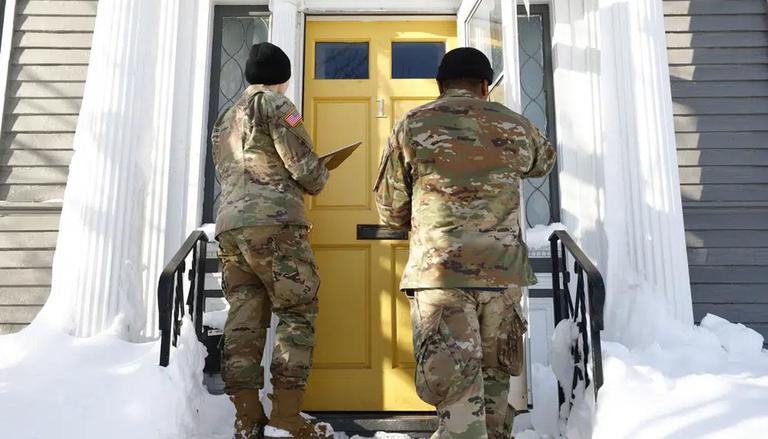 
The National Guard went door to door in parts of Buffalo on Wednesday to check on people who lost power during the area's deadliest winter storm in decades, and authorities faced the tragic possibility of finding more victims amid melting snow.

Already, more than 30 deaths have been reported in western New York from the blizzard that raged Friday and Saturday across much of the country, with Buffalo in its crosshairs.

Carolyn Eubanks, who relied on an oxygen machine, collapsed after losing electricity at her Buffalo home during a time when emergency workers were unable to respond to calls, son Antwaine Parker told The Buffalo News.

"She's like, I can't go no further.' I'm begging her, Mom, just stand up.' She fell in my arms and never spoke another word," Parker told the newspaper.

Parker and his stepbrother knocked on nearby doors, seeking help. They found it when a stranger, David Purdy, answered and helped them carry the 63-year-old Eubanks inside and try in vain to revive her. Purdy and his fiancee sheltered her body until first responders arrived the next day.

"I done it as respectful as I could," Purdy told The Buffalo News.

Timothy Murphy, 27, died after snow covered a furnace and sent carbon monoxide into his Lockport home, the Niagara County sheriff's office said. Monique Alexander, 52, was found buried in snow after going out in the storm for unclear reasons, her daughter told The Buffalo News.

Anndel Taylor, 22, died in her car after it got stuck on her way home from work, her family told WSOC-TV.

As a deep freeze eased into milder weather Wednesday and the number of lingering outages dwindled, New York National Guard members knocked on doors in Buffalo and its suburbs.

"We are fearful that there are individuals who may have perished, living alone, or people who are not doing well," said Erie County Executive Mark Poloncarz said. The county encompasses Buffalo.

One pair of National Guard troops, clipboard in hand, knocked on the door of a home as people nearby tried to dig their way to businesses on a major avenue in Buffalo.

Twenty-five Guard teams were making such rounds Wednesday, spokesperson Eric Durr said by phone. He said troops had made some wellness checks previously but went out with a specific list of questions, including whether residents had food, water, electricity or any special health or medication concerns.

"The idea is to get a sense of: What are the needs out there?" said Durr, who noted that troops were offering food and water to those needing it.

Buffalo Police Commissioner Joseph Gramaglia said officers from his and other agencies also were searching for victims, sometimes using officers' personal snowmobiles, trucks and other equipment.

With the death toll already surpassing that of the area's notorious Blizzard of 1977, local officials faced questions about the response to last week's storm. They insisted that they had prepared but that the weather was extraordinary even for a region prone to powerful winter storms.

"The city did everything that it could under historic blizzard conditions,” Buffalo Mayor Byron Brown, a Democrat, said at a news conference.

With enough snow remaining that driving was still banned in New York's second-most-populous city, officials worked to clear storm drains and watched a forecast that calls for some rain later in the week. Erie County officials said they were preparing for the possibility of some flooding and of ice jams in local creeks.

The National Weather Service said any flooding was expected to be minor.

Buffalo Niagara International Airport reopened after a five-day closure, though many flights were cancelled.

With temperatures expected to rise into the mid-40s (around 7 degrees Celsius) on Wednesday and the low 50s (around 10 Celsius) by Friday, local officials worked to clear storm drains and watched a forecast that calls for some rain later in the week. Erie County officials said they were preparing for the possibility of some flooding and of ice jams in local creeks.

The weather service said only minor flooding was expected.

While suburban roads and most major highways in the area reopened Tuesday, state and military police were assigned to enforce Buffalo's driving ban. Poloncarz said the goal was to have at least one lane on every street open by Wednesday evening.

It is tough going. Even on some of the city's main streets, there were still cars buried in snow that were being towed Wednesday to make way for snowplows.