'Not Under Our Care': Pentagon Denies Claims Of Abandoning Military Service Dogs In Kabul

Pentagon spokesperson John Kirby clarified that the U.S. Military did not leave any military working dogs in cages at Hamid Karzai International Airport 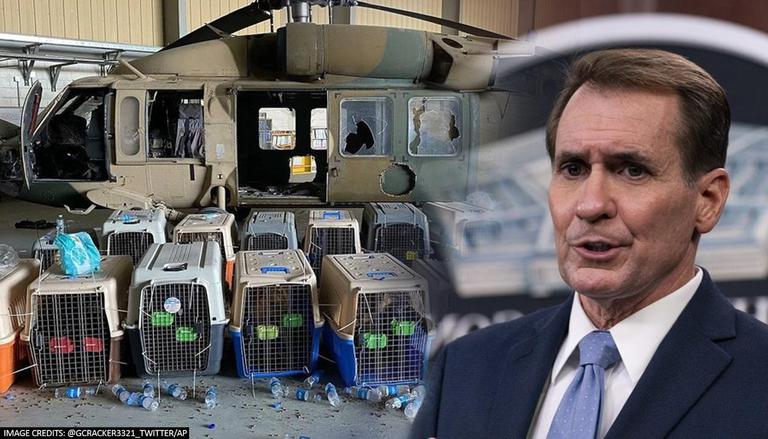 
The United States has denied the accusations of abandoning military service dogs in Kabul during the last withdrawal of American troops from Afghanistan. Ending America's longest war, the US completed its withdrawal from Afghanistan after 20 years of presence on August 31.

Pentagon press secretary John Kirby tweeted, "To correct erroneous reports, the US military did not leave any dogs in cages at Hamid Karzai International Airport, including the reported military working dogs. The photos circulating online were of animals under the care of the Kabul Small Animal Rescue, not dogs under our care".

To correct erroneous reports, the U.S. Military did not leave any dogs in cages at Hamid Karzai International Airport, including the reported military working dogs. Photos circulating online were animals under the care of the Kabul Small Animal Rescue, not dogs under our care.

According to the Defense Department spokesperson, US personnel took various measures to help the Kabul Small Animal Rescue despite several attacks the country witnessed.

From the year 2020, Kabul Small Animal Rescue has been affiliated as a veterinary clinic and non-profit organization that has been aiding animals in Afghanistan with the Society for the Prevention of Cruelty to Animals. Their website states that the organization is aimed to provide secure, healthy boarding options for their rescue partners, who support worldwide adoptions of Afghan cats and dogs.

Pictures of dogs in Kabul

The photos of the imprisoned dogs have become the topic of concern on social media. The animal rights group 'American Humane' had criticized the US government for abandoning military service dogs in Kabul.

In addition to Americans, American Military Dogs were reportedly left in Kabul, in their cages with no access to food or water at the orders of the Pentagon. But hey, no mean tweets from the bad Orange Man! 1/2 pic.twitter.com/T1grPIkbk8

On 31 August, US President Joe Biden defended his withdrawal plan from Afghanistan calling it a 'right decision, wise decision and the best decision' for America. Addressing the nation, the President stated that the decision to end US military presence in Afghanistan was a unanimous choice of civilian, military advisors, service chiefs and commanders in the field. Standing by his August 31 deadline, Biden said that he 'respectfully disagreed' with those who thought that the pullout should have started sooner.

Biden said, "The decision to end US military presence in Afghanistan was based on a unanimous recommendation by civilian, military advisors, service chiefs and commanders in the field. Their recommendation for safe passage of remaining Americans was not to continue".

He further appreciated the US servicemen and stated that the success of the evacuation operations lay in the 'selfless courage of our military.'

WE RECOMMEND
US climate envoy John Kerry visits Japan, China for talks on cutting emissions
US says mission to evacuate Americans from Afghanistan will continue after troop exit
Donald Trump suggests US to 'bomb' its $85bn military equipment in Afghanistan
Shocking video shows Taliban hanging man from US Black Hawk helicopter over Kandahar
US: Meet super-fit-mom-of-seven who is often mistaken as her daughter's elder sister