Almost 40 days after reports of slain terrorist Osama Bin Laden's son Hamza bin Laden was reported by US media, White House on Saturday confirmed that he was killed in the backyard of Pakistan. The White House statement released on September 14 said that he was killed by the United States' counter-terrorism operation in Afghanistan/ Pakistan region. The statement has further stated that the elimination of Osama's son 'deprives Al-Qaeda of important leadership skills'. The statement adds that he was responsible for various terrorist activities and dealt with various terror groups. The United States in February this year had announced one million for information on his whereabouts. The State Department had identified him as a "Specially Designated Global Terrorist" on January 2017. 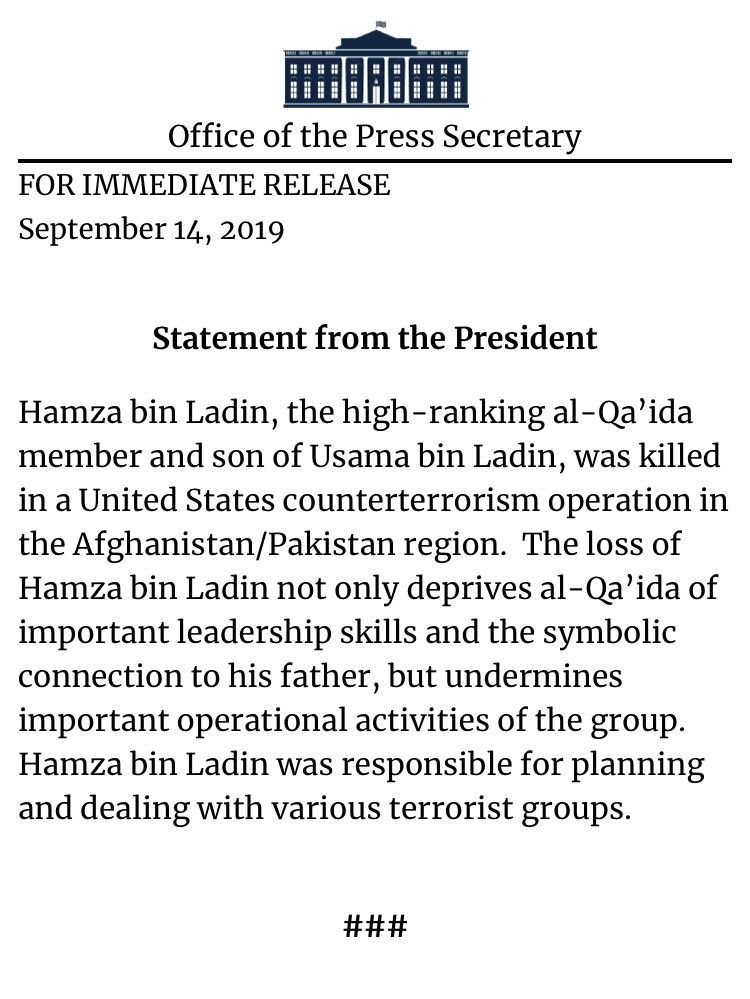 Osama bin Laden was killed on 2 May 2011 in Abbottabad, Pakistan, during a US Navy SEAL special operation following a 10-year manhunt.  Recently, Pakistan PM Imran Khan on his visit to the United States, for the first time revealed that the ISI provided intelligence to the CIA which helped the US track down and kill Osama bin Laden in Pakistan. This comes as a significant development as Islamabad had so far denied having any knowledge of the dreaded al-Qaeda chief in the country. He was shot dead by US Navy Seals in 2011.

Imran Khan's statement is significant because Pakistan had so far denied that it had any information about the hideout of Osama. He was killed in a covert raid by US special forces. "It was the Inter-Services Intelligence (ISI) that gave the information which led to the location of Osama bin Laden. If you ask the CIA it was the ISI which gave the initial location through the phone connection," Khan said.

Al Qaeda is known for beheading and filming the incidents, their first being the beheading of Nick Berg, an American in Iraq who was abducted and beheaded according to a video released on May 2004 by Islamist militants in response to the Abu Ghraib torture and prisoner abuse involving the United States Army and Iraqi prisoners. The video of man in orange jacket being beheaded was widely spread and along with it the arrival of the brutal and horrendous IS was announced. The group called for jihadists to take part in what they call 'holy war'. The group emerged after the Arab volunteers of the Afghanistan war waged a war against the US. Interestingly, these Arab volunteers were part of Afghan Mujahideen backed by the United States to expel the Soviets out of Afghanistan. After the killing of Bin laden, though it was believed that without the leadership the group has been dismantled, they have been rising and trying to consolidate, as per some intelligence reports. The latest intelligence report by the US warns that senior al-Qaeda leaders are "strengthening the network's global command structure and continuing to encourage attacks against the West and the United States."