In his meeting with Biden, PM Modi redefined the contours of the India-USA ties &highlighted 5T’s - Tradition, Talent, Technology, Trade, and Trusteeship 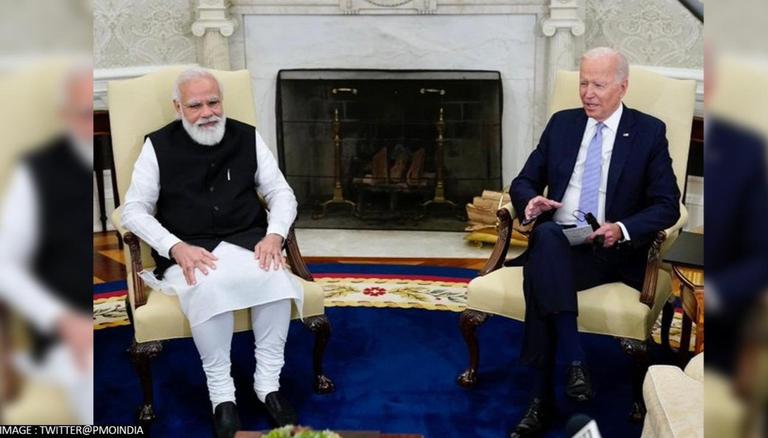 In his meeting with President Biden, PM Modi redefined the contours of the India-USA ties and highlighted 5 T’s - Tradition, Talent, Technology, Trade, and Trusteeship that bind the nations together. During the meeting held at the White House, PM Modi also shared his vision for the India-USA relationship in the coming decade. He remarked how this bilateral relationship is steep in a rich tradition of working together.

The Prime Minister significantly highlighted the unwavering faith in the youth of the two countries to drive this transformative relationship. He also appreciated the contribution of the Indian diaspora towards US progress.

This decade will be shaped by talent and people-to-people linkages. I am glad the Indian diaspora is making an active contribution towards USA’s progress: PM @narendramodi pic.twitter.com/6sTQnxtpMR

'Much to be done in trade'

PM Modi also mentioned trade and the need to complement each other’s strengths. He said the relationship between the two nations will open the doors for several Indian and American companies, leading to a boost in economic ties. The PM further talked about technology to drive futuristic growth.

Technology is becoming a driving force. We have to utilise our talents to leverage technology for greater global good: PM @narendramodi

Insisting that the third decade of the century is very important, PM Modi highlighted that under the leadership of Joe Biden, 'the seeds sown' by them will be a transformative period in Indo-US relations and democracies all across the world.

"During this transformative period in Indo-US relations, both countries are committed to democratic values and traditions and they will only increase further," India's PM further said.

Recalling a quote by Mahatma Gandhi, both PM Modi and President Biden spoke about trusteeship and suggested a cooperative and congenial way to work for the global good.

President @JoeBiden mentioned Gandhi Ji’s Jayanti. Gandhi Ji spoke about Trusteeship, a concept which is very important for our planet in the times to come: PM @narendramodi pic.twitter.com/m3Qv1O0XOD

President Biden and Prime Minister Narendra Modi ended the bilateral meet on a good note, with a handshake and a hug, signifying the solidarity between India and the US at present, as well as in the near future.