Pope Francis said that he was praying for “spiritual strength which triumphs over violence and overcomes evil with good” for victims of Christmas parade crash. 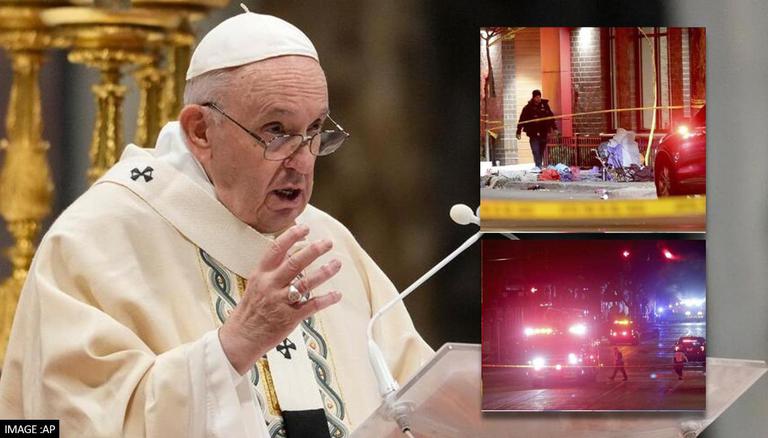 
Vatican pontiff Pope Francis on Tuesday, Nov 23, expressed his condolences to the victims of the Christmas parade crash in Wisconsin that killed six and injured more than 40. In a statement, cited by Associated Press, Pope Francis said that he was praying for “spiritual strength which triumphs over violence and overcomes evil with good” as he expressed support and hope for the victims of the “tragic incident”, stressing that he is “spiritually close to them.”

The Vatican secretary of state, Cardinal Pietro Parolin, sent the telegram of condolences on behalf of Pope Francis to the archbishop of Milwaukee, Monsignor Jerome Listecki, which was accessed by the Associated Press. In his message, Pope prayed for those impacted by the harrowing tragedy, as he asked the Lord “to bestow upon everyone the spiritual strength which triumphs over violence and overcomes evil with good.”

Six dead, more than 40 were injured after SUV plows through Christmas parade

As many as six, including a child, were dead and more than 40 were injured in a harrowing incident after a man plowed his SUV through a Christmas parade in the Milwaukee suburbs in Wisconsin, United States earlier on Sunday. The holiday season turned into a scene of bloodbath and deadly mayhem shortly before midnight as 11 adults and 12 children were ferried to local hospitals in the ambulance while others were rescued in the commuters' vehicles to be treated for their critical bodily wounds from the car driven on them.

Waukesha Mayor Shawn Reilly called the incident a "horrible and senseless act" on Twitter. Waukesha Police Chief Dan Thompson told the US reporters on the ground that around 4:39 p.m. a red SUV broke through the parade barricades and headed west on Main Street, eventually mowing over people.

"The vehicle struck more than 20 individuals. Some of the individuals were children and there were some fatalities as a result of this incident," Waukesha Police Chief Dan Thompson told Milwaukee Journal Sentinel. A "person of interest," Darrell Brooks Jr., aged 39, was taken into custody who now faces five counts of intentional homicide, according to the prosecutor Susan Opper.