JR Storment, a tech executive who lost his son, shared a blog on LinkedIn in which he warned all working parents about spending enough time with their children.

A heartbreaking blog on LinkedIn, written by J.R. Storment titled as “It's later than you think” has gone viral on social media. Storment, a Tech executive in Portland, describes his absence from the social world and his work life after the death of his 8-year old son, Wiley. He warns all working parents to spend more time with their children and said that he regrets not doing the same. Storment also believed that he failed to give the required attention to his personal life, and was proud of his achievements in his career. However, his son's death has acted as an eye-opener for him.

Storment was a proud father of twins, named Oliver and Wiley and husband to his wife, Dr. Jessica Brandes. He lost one of them after eight years. It was later informed by the doctors that Wiley's cause of death was Sudden Unexplained Death of Epilepsy (SUDEP). In the blog, which is now viral, he explains the changes that he's noticed in himself after losing a son and regrets that he's still working. After three months, the father is seen grieving about the loss and addresses the issue of 'Work-Life Balance' in order to inform his readers to do the same and have fun because “it's later than you think”.

“Hug your kids. Don’t work too late. A lot of the things you are likely spending your time on you’ll regret once you no longer have the time. I’m guessing you have a 1:1 meeting on the books with a lot of people you work with. Do you have them regularly scheduled with your kids? If there’s any lesson to take away from this, it’s to remind others (and myself) not to miss out on the things that matter”, says Storment

The father also shared an image from Wiley's journal which was discovered a day after his death. In the little kid's handwriting, it said that Wiley also wished to develop technology like his father. Storment goes on describing the intricate details that built his family together, and how they had always been a “family of four” and it is left with just three people. However, towards the end of his blog, he mentions how his other son, Oliver says that “triangle is the strongest shape”.

Many who know of my son's death have been afraid to ask what happened. Others who don't have wondered why I've disappeared. Here is the story: https://t.co/Egjzj4u5TZ

The heartwrenching blog which described a painful experience for the Storment family has also created a community on the internet that sympathizes with them. While some of them shared similar losses in their family, others thanked Storment for sharing the story and putting perspective on the loss. One user also said that Storment's post was “one of the most beautiful and heartbreaking posts”. People of the internet also believe that loss is never linear. There are hundreds and thousands of Twitter users who've sympathized with the family's loss.

Your loss is devastating. The definition of heart breaking. But your perspective, your love for your boy, and your triangle are beautiful beyond words.

Thank you for sharing this.

This is one of the most beautiful and heartbreaking posts. Thank you and your family being willing to share. Loss is not linear.
May his memory be a blessing and forever in your heart. May we as a community hold you up now and in the fiuture. 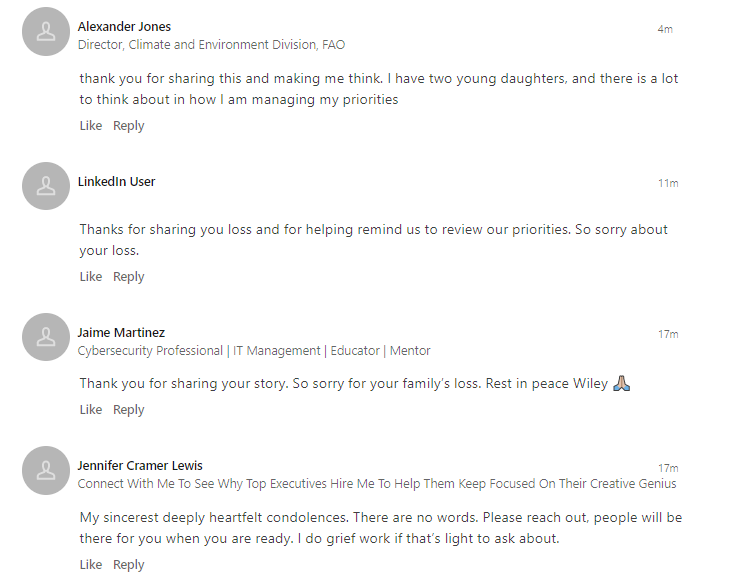 Read - Afghanistan: Death Toll Increases To 16 In Blast By Taliban In Kabul

Jessica's plea to the world

Storment's wife had already written a similar blog on LinkedIn, sharing her experience as the mother and requested the people to get over the culture of giving “space” instead, talk to them about their son's loss, which will only help them heal from the pain. Just like her husband, Jessica also urged the world to take vacations and sabbaticals to be with the people they love. Jessica also talked about her learnings from her son's death and explained how time is fragile.