Sokhary Chau Becomes First Cambodian-American Mayor In US; Know All About Him

Sokhary Chau, a city councillor in Lowell, Massachusetts, was unanimously picked by his council peers to assume the legislative body’s top post on Monday. 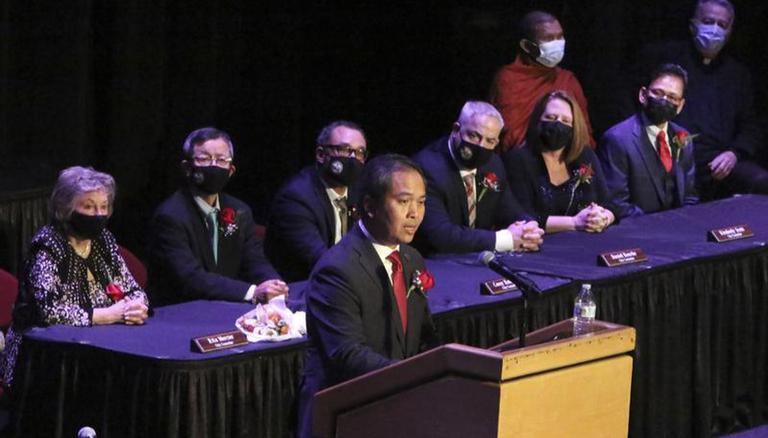 
Sokhary Chau, a city councilor in Lowell, who came to America as a refugee become the first Cambodian-American mayor in the United States on January 3. While delivering a speech during the Lowell City Council swearing-in ceremony, he recounted old memories of reaching American soil after surviving the Khmer Rouge’s brutal rule. Also, he turned emotional when he was abruptly picked by his council peers to assume the legislative body’s top post. With this, Chau also became the city’s first Asian American mayor.

"God bless America, right? I was a refugee, now I’m the mayor of a major city in Massachusetts," news agency AP quoted the 49-year-old, who works for the US Social Security Administration after being officially sworn in on Monday.

"I don't know if that could happen anywhere else in the world. I'm still trying to absorb it. As a proud Cambodian American, I am standing on the shoulders of many immigrants who came before me to build this city," Chau added.

While delivering his speech, Chau broke down when he recounted how his father Chau recounted how his father, a captain in the Cambodian army, was executed during the civil war. Also, he remembered his late mother who had once managed to save Chau along with his seven siblings. According to Chau, it was the most difficult situation for his family.

READ | Verdict read in US trial of former Theranos CEO

"When I was 9-year-old, my family initially settled in Pittsburgh, Pennsylvania, with the help of the Catholic Church. The extraordinary experience offered by the Church had promoted us to convert to Christianity," he said in an interview with news agency AP.

While the whole community was searching for low-grade jobs, Chau said he chose to study further. Luckily, he got earned a scholarship to Phillips Academy, an exclusive boarding school nearby. Later, he completed economics and political science on a scholarship from Macalester College in St. Paul, Minnesota. The newly appointed city councillor said he was associated with financial services, including running a mortgage lending before joining politics in 2000. His wife was also associated with the same financial services, according to an AP interview.

WE RECOMMEND
US: Thousands of flights cancelled, delayed at start of workweek
In US, 1 Lakh people hospitalised with COVID as over 1 Mn new cases reported in 24 hours
Omicron upends return to US schools and workplaces
US: Congress' doctor wants 'maximal telework' amid virus surge
US armed forces with 'shoot-to-kill' order were deployed in DC ahead of Jan 6 riot: Report