A video shared by Santa Cruz County on Facebook has gone viral and left netizens shocked as in the clip one can see a man being swept by strong waves.

A video shared by Santa Cruz County on Facebook has gone viral and left netizens shocked as in the clip one can see a man being swept by strong waves. According to international media reports, the incident took place when the US National Weather Service had issued a high surf advisory. In the post, the authorities have also mentioned that the unnamed beachgoer was treated for his injuries and transported to a hospital.

The caption of the facebook post read, “The National Weather Service has issued a high surf advisory through 9 a.m. Thursday, with swells up to 25 feet on west-facing beaches. Be careful on your coastal New Year's Day hikes, and never turn your back on the ocean! Waves can sneak up on you, as this Bonny Doon beachgoer recently discovered (he is fine after a rescue by State Parks)”.

READ: Comedian Celeste Barber’s Bushfire Fundraiser Is A Hit On The Internet

According to international media reports, the incident occurred at around 4 pm on December 20. In the nine-second video clip, one can see the man standing on a rocky outcrop at Bonny Doon Beach in Santa Cruz, California. After a couple of seconds, one can see in the video that a large wave crashes over the man and swept him into the ocean. Thankfully, the man was saved by California Fire and California State Parks rangers.

The video has also collected a number of comments. One user commented, “He looks like an ant on that rock! Lucky he was rescued”. Another said, “Not everyone in know's how slippery the rock are when wet. Nobody was telling him not to go see own on the rock and not everyone knows about how high the waves can reach”. One person also wrote, “He almost won a Darwin Award”. 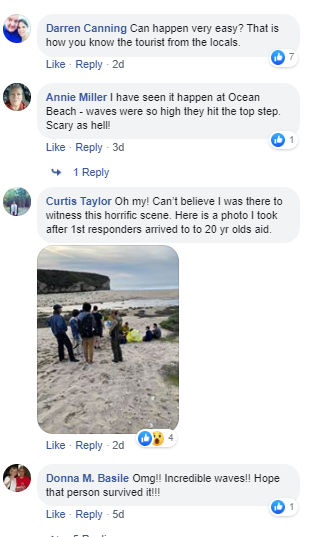 While a man was swept by waves in one part of the country, authorities in Utah faced an avalanche on January 2 in Wasatch-Cache National Forest, situated on the east of Salt Lake City. The reason was to clear a dangerous pile-up of snow on a mountain slope. The video of the same surfaced on the internet which was posted by John Gleason, a public information officer at the Utah Department of Transportation. It immediately went viral after it was shared on Twitter. The video managed to garner 29.8k views with 204 retweets and 899 likes.

Incredible video showing an avalanche triggered by our UDOT crews this morning in Little Cottonwood Canyon. The control work they do is critical to the safety of everyone traveling in the canyons. A big thank you to our team for making the canyons safe! pic.twitter.com/fZpReJ3tem