Major General Patrick Donahoe of US Army made 'public service announcement' after he riled up a controversy indulging in a Twitter feud over COVID jabs. 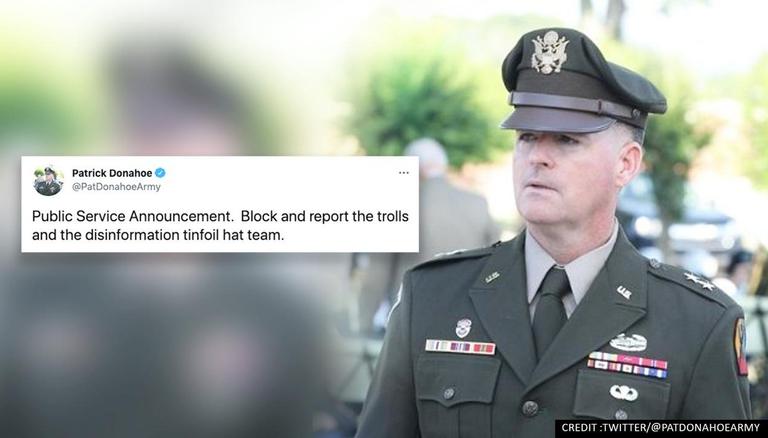 
A US Army General has stirred up a Twitter war of words and a slew of opinions after he posted what he called a "Public Service Announcement," instructing people to "block and report the trolls and the disinformation tinfoil hat team.” He apparently had a meltdown after the Twitteratis got on his nerves, as a result of which he was so riled up that he stereotyped all those who disagreed with him as “trolls” and members of the “disinformation tinfoil hat team”. He lashed out at the critics on Twitter accusing them of a disinformation campaign. The  commanding general of the US Army Maneuver Center of Excellence at Fort Benning had earlier also shared a tweet stating, “If you can’t talk you’re just camping.”

Major General Patrick Donahoe of the US Army made the 'public service announcement' after he riled up a controversy indulging in a Twitter feud, getting involved in vaccine politics of the US. Donahoe’s verbal outbursts followed a Twitter user’s point about the serious issue of military suicide that he conveyed in a polite way. In a petulant response, the US Army Maj. gen. lambasted the Twitter user saying, “Your false equivalency of suicide compared to the virus doesn’t hold up.” He was earlier making a point for hesitant Americans to get the COVID-19 vaccine due to the surge in the highly transmissible delta variant.

“Three weeks ago since then we've seen a spike in young trainees in the ICU, spike in trainees arriving positive, and it moves quickly in the formation,” Donahoe wrote discussing the new delta variant. Furthermore, he urged the ‘anti-vaxxers’ to “get ahead get the shot,” adding that it takes “five weeks to build the immunity. If you haven't done so, do it right now. Delta variant isn’t playing.”

Following his vaccination appeal, a Ph.D. student had brought out the issue related to the US armed forces where he cited the Q4 report from 2020, saying that there were “26 more suicides than in Q4 2019” due to isolation, COVID-19 restrictions and lockdown. While the Hillsdale student who served at the USMC, made just another point, Major General Patrick Donahoe responded in a condescending tone “correcting” the student. 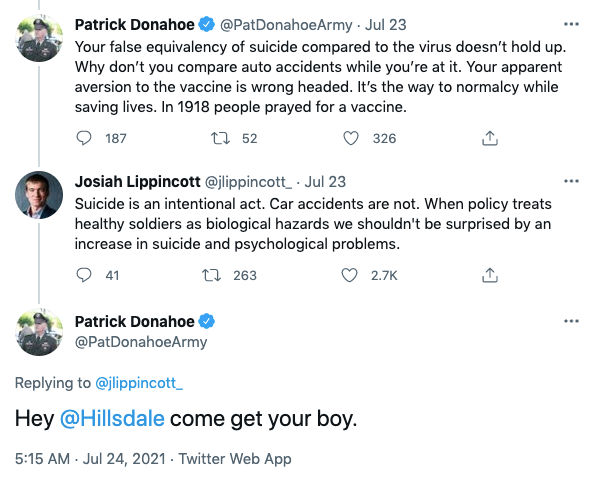 “Why don’t you compare auto accidents while you’re at it,” he asked the student, as he added that in 1918 “people prayed for a vaccine.” He also tagged the Hillsdale college saying, “Hey Hillsdale, come get your boy” when the latter responded kindly that “suicide is an intentional act, car accidents are not.”

Perturbed at his flighty comments, an American wrote in the comments, “General is this any way for an officer to be interacting with members of the public?” Another meanwhile stated, “If this is how you handle Twitter fights it must be terrifying being under your command in a real fight.” One other angry commenter stated, “If you are having trouble understanding why you failed in Afganistan, look no further than this thread.” One other said, “Seriously General?”

Please tell me you're not a real general and that you play one on TV or something.

Public Service Announcement: current leadership is why the United States hasn’t been in the winning wars business for the last 70 years.

Where were you the last 20 years Scotty?

Wow this is a general.

I’m sorry sir, but from where I’m sitting you were in the wrong

Regardless of opinion on vaccine, he asked a legitimate question about the suicide epidemic we have seen since GWOT began

On top of that, it’s completely beneath the office you hold to respond in that way

PSA Generals should not be on twitter they have important jobs to do.

With all due respect. I would a think a Major General in the U.S. Army would have much bigger concerns. #bizarre

Please tell me this is a joke, you own this now @USArmy 🤦🏼‍♂️ @USNavy take notes don’t be like this guy👆🏼🙄

Other counties are looking at this and laughing. We are an unserious country.

Is this a real general or a parody account?