US Condemns Erdogan's Remarks Against Jews, Says 'anti-Semitic Language Has No Place'

The United States, on May 18, strongly condemned recent comments made by Turkish President Recep Tayyip Erdogan calling them “anti-sematic.” 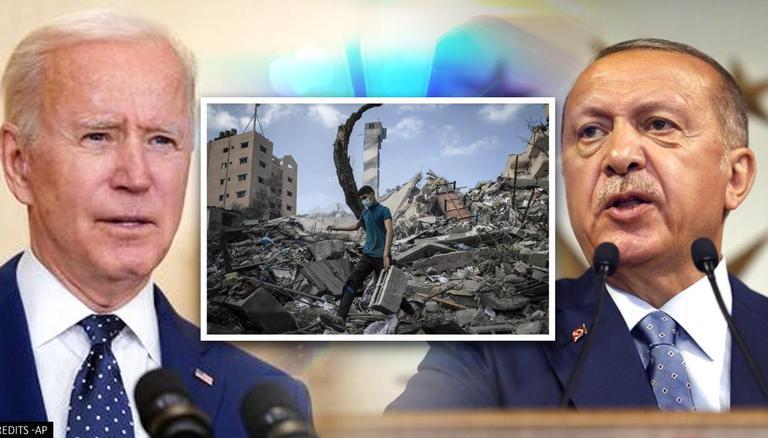 
The United States, on May 18, strongly condemned recent comments made by Turkish President Recep Tayyip Erdogan calling them “anti-sematic.” In a statement, the US State Department asserted that Erdogan’s comments were reprehensible and urged him to refrain from making “incendiary remarks” that could cause further violence. As the Israel-Palestine conflict witnesses dramatic escalation for the second week, Washington asked Ankara to join its call to end the violence in the region.

Anti-Semitic language has no place anywhere.  The United States is deeply committed to combatting anti-Semitism in all of its forms. We take seriously the violence that often accompanies anti-Semitism and the dangerous lies that undergird it. We must always counter lies with facts and answer crimes of hate with justice.

Turkish President Erdogan’s anti-Semitic remarks are reprehensible and have no place on the world stage — or anywhere. We call on Turkey to refrain from language that could incite further violence. The U.S. is focused on bringing an end to the conflict. https://t.co/6CmhSGqn0m

Ever since the conflict began, Erdogan has been amassing support for the Palestinians and has held several telephonic calls with Islamic leaders for the same. Additionally, the Turkish president, who himself is a staunch Islamist, has championed the Palestinian cause during his 18-year rule. In recent week, he has accused Israel of "terrorism" and said it was their “nature”. “They are murderers, to the point that they kill children who are five or six years old. They only are satisfied by sucking their blood," he said at a recent press meet.

On Monday, he accused US President Joe Biden of having "bloody hands" because of Washington's support for Israel's bombing campaign on Gaza Strip. In a televised speech, Erdogan said, “You are writing history with your bloody hands.” He added, “You forced us to say this. We cannot step back.”

Meanwhile, it has been nine days since Islamist fundamentalist group Hamas fired the first projectile onto the Israeli soil. Since then, both sides have engaged in bone-rattling air and ground exchanges. The 362 square kilometres Gaza Strip, where buildings have been reduced to rubble, has suffered the worst. On May 19, the number of Palestinians who died in the conflict surpassed 217, including 63 children and 36 women. At least 1,500 people have been injured, as per the Gaza Health ministry. On the other hand, Israel lost 12 residents, including two children, a soldier and an Indian origin woman.