After the Iraqi airbase housing the US military and coalition forces were attacked by multiple rockets, the US Department of Defense issued a statement

After the Iraqi airbase housing the US military and coalition forces were attacked by multiple rockets, the US Department of Defence issued a statement and said that they will take all necessary measures to protect and defend US personnel, partners, and allies in the region.

The statement issued by the Assistant to the Secretary of Defense for Public Affairs Jonathan Hoffman also said that it was clear that these missiles were launched from Iran. An Iranian state TV described the attack as Tehran’s revenge operation over the killing of the Islamic Revolutionary Guard Corps (IRGC) Gen. Qassem Soleimani.

Statement issued by the US 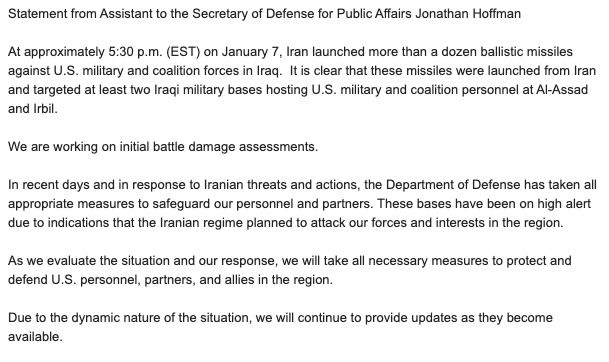 Tensions between Iran & US

The longstanding tension between Iran and US surfaced again as the Iranian General was slain by the US in an airstrike near Iraq's Baghdad International Airport, ordered by US President Donald Trump on Friday. Post this, Iran had threatened "harsh retaliation" and subsequently, two airstrikes were reported near US Embassy in Baghdad’s Green Zone on Saturday and Sunday.

Following the developments, Trump said that the US would strike 52 sites in the Islamic Republic if any Americans were harmed. After this, there has been a continuous war of words between the two countries' officials.

PEOPLE HAVE PLEDGED SO FAR
LATEST NEWS
View all
2 hours ago
US Attorney General: Divide between blacks, police must change
2 hours ago
US: Bail set for 3 ex-officers accused in Floyd death
7 hours ago
US: NYC sees peaceful Floyd protests, then an ambush amid curfew
7 hours ago
Indiana sees unemployment filings drop as virus limits ease
2 hours ago
US: Murkowski 'struggling' on whether to support Trump