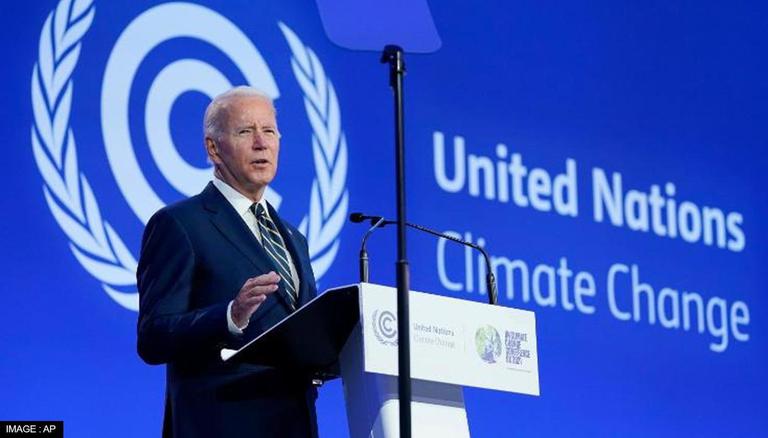 
The United States environmental advocacy group Sunrise Movement has criticised President Joe Biden's remarks at the UN Climate Change Conference of the Parties (COP26) summit. The advocacy group has raised concern over the commitments set by Washington and added that the US should set more ambitious commitments and work towards achieving them, Sputnik reported. The advocacy further stated that they must make efforts to decrease greenhouse gas emissions before telling others to do it.

Varshini Prakash, executive director of Sunrise Movement, in a statement, shared her views on US President Joe Biden's remarks at the COP26 summit at Glasgow. Prakash criticised the US President's speech at the global event on climate. She highlighted that Biden attended the COP26 summit in the UK "empty-handed", and there were only words that were on paper, reported Sputnik. She further underlined that the US President stated that the country would achieve its target of reducing greenhouse gas emissions in half by the end of the decade, in comparison to the 2005 levels.

Furthermore, Prakash asserted that before suggesting to the international community about what efforts they should make on climate change, he should himself make efforts first. Moreover, Prakash urged Biden to pass his full Build Back Better Act and make efforts to hit the target of reducing US emissions by over 50% by 2030. The advocacy group official pointed out the mass protests that are ongoing from last month and are focused on the full passage of Biden's climate and jobs agenda.

The Executive Director of Sunrise Movement has stated that the activists have supported protests which show the intent of people in addressing the climate change issue. Varishini Prakash added that the activists have been demanding the passing of a reconciliation package that addresses the climate crisis. She urged the Biden administration for enhancing Medicare, which would act as a way for citizenship.

READ | Did US President Joe Biden fall asleep during COP26 speeches? You be the judge

Addressing the COP26 climate summit on 1 November, the US President said that the world has the capacity to build an equitable clean energy future. Biden underlined that these efforts will provide clean air for kids, healthier forests, bountiful oceans and a healthy ecosystem for the planet.

Furthermore, he asserted that US greenhouse gas emissions will be cut by well over a "gigaton" by 2030. He highlighted that they are making efforts to make it affordable for people to save on their bills by "installing solar panels, weatherising their homes, lowering energy prices." The US President emphasised that their "Build Back Better framework" will make investments in clean energy which would help in dealing with the climate crisis.